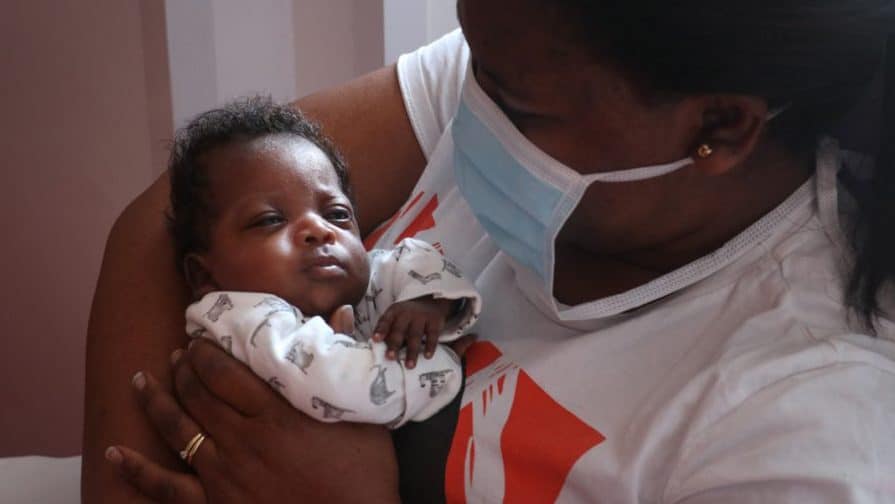 Emmanuel’s mum and dad prepare to take him home

His mum, Evelyn Ntiamoa, told the News how her newborn was kept in the premature baby unit until March 20 after arriving at the end of January; far before his April 27 due date.

In that time, the Coronavirus pandemic had rapidly escalated – and as a precaution visitors were limited at the unit to just one parent.

After being discharged, Emmanuel spent just a week at home with his mum, Dad, and four-year-old brother Morris before being rushed back to King’s when he suddenly deteriorated, with difficulty breathing and feeding.

“When he first became unwell we were worried about going to hospital in case he got Coronavirus,” Evelyn told the News.

“It was very unexpected because he had been in the baby unit when he was born and then came home, and only we were allowed to see him.  No one in our family had symptoms. We don’t know how he got it.

“The doctors told us at first it could be sepsis and that he may not make it through the next 24-hours – this is before he was even taken to a ward.

“When they did the Coronavirus test and told us he was positive, he was put in paediatric critical care and we had to self-isolate for fourteen days and weren’t able to see him.

“The consultant was telling me he had to find medicine he could use for Emmanuel, as some things he couldn’t have because he was premature.

“It was very hard not seeing him and when they told me he might not recover, I wasn’t in my right frame of mind.

“A nurse made sure I could video call to see him, and I called the hospital every day.” During that time Evelyn, who works as a carer, was at home with her Southwark Council-worker partner and Emmanuel’s brother, who would have been in reception class had it not been for the outbreak and their quarantine.

“After the fourteen days was over and when I was going into hospital to see Emmanuel, his brother was saying to me ‘Mummy, tell my brother I like him’,” she says.

“Once he snapped back and recovered all the nurses and doctors were amazing at reassuring me he was getting better and would make it and come home,” she says of King’s staff.

Emmanuel has now made a remarkable recovery and is back home in Peckham.  As the family left the hospital, the staff lined up and gave them a big send off.

“Morris is so excited now his brother is home and keeps trying to kiss him and wants to pick him up,” says Evelyn.

“No one has been able to visit or see him but he has had video calls with his grandma and I’m just glad he is here. I just want to be with him.”