Video: Meet the 87-year-old Rotherhithe pensioner singing wartime songs every week to cheer up her estate 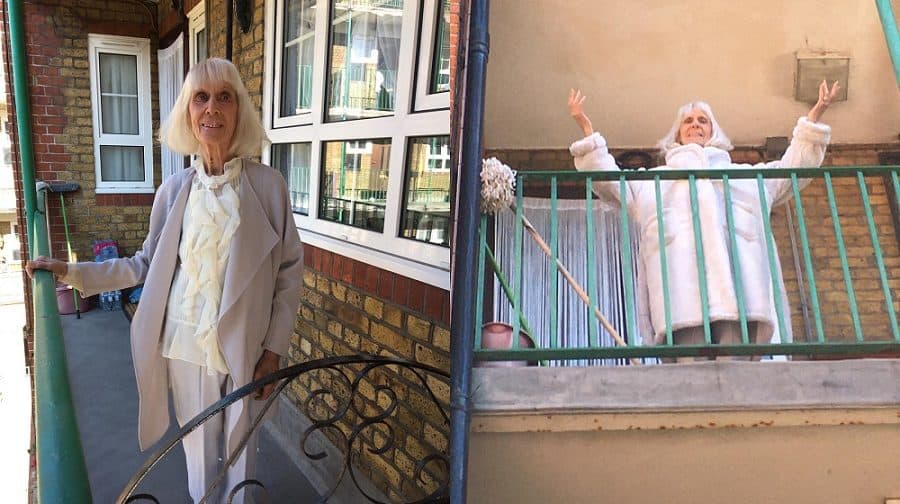 Every Thursday, after the applause for the NHS has died down, a Rotherhithe 87-year-old takes to her balcony and sings the wartime songs of her youth.

Joanie O’Connor has lived on Swan Estate for 65 years, and as a child of the Blitz, remembers bombs obliterating swathes of Bermondsey and Rotherhithe.

She began her weekly songs with Dame Vera Lynne’s classic ‘We’ll Meet Again’, inspired by her mother’s own singing to mask the sound of bombs exploding near shelters more than seven decades ago.

And like her mother – a cleaner at Guy’s Hospital – the pensioner is singing to keep up her community’s spirits in a crisis.

Watch the video of JOANIE SINGING:

“When we first went out there and clapped, I just thought I’m going to sing a song,” she told the News.

“So ‘We’ll Meet Again’, I sung them that. It just makes people forget things for a while. I’m doing it because I like it, but they all dance, they sway. Not all of them know the words though.

“Some people just come out and then in again, but I thought, no, we’ll make a party of it.”

The 87-year-old sings three old classics every week across the balconies to others watching on their doorsteps or from a distance in the block’s main square.

This week she is planning on singing one of her favourites – My Yiddishe Momma, a tale of nostalgia for the ‘old world.’

Neighbours have also asked if she can sing ‘You’ll Never Walk Alone’, inspired by Captain Tom Moore, the 99-year-old war vet who raised millions for the NHS.

“I’m planning on printing out the lyrics and having the neighbours all sing along,” said one o her neighbours, Wendy Roberts. “She breaks my heart and makes me cry everytime!”

“I sing all the old songs, songs that have got meaning,” adds Joanie. “I’m telling a story really, and they all shout out for more.”

Joanie remembers the first day of the Blitz when she was eight-years-old, she tells the News over the phone. “We had all the air wardens come around shouting, ‘this one’s for real, get down the shelter’. I looked up and there was hundreds of planes,” she says.

“Down the shelter, my mum was singing to cheer people up. You could hear the bombs but everybody was singing.

“And years ago, ladies used to have big perms with wires in their hair, and I was helping them get them out of their hair.”

When the bombs stopped and the all-clear was sounded, the family discovered their house had been hit.

“Our house was gone, everything was gone,” she recalls. “We had to go to my nan’s and we went across the tunnel, there were people lying on the ground.

“It was a terrible war, but everybody helped everybody.”

The coronavirus crisis has some similarities with World War Two. “In the war, you could hear the bombs and doodlebugs coming, you would watch them to see where they went,” she says.

“It was life-and-death, and now it’s the same. You know, you count yourself lucky you can live through it.” But Joanie, a former supervisor at Southwark Crown Court, has one piece of advice: keep yourself busy.

She plays cards, reads, and listens to music to pass the time while under lockdown. “You’ve just got to think, ‘What will be, will be,’” Joanie tells News readers.

“Some people are thinking about it all the time, but I think turn it off, you’ve just got to do what you’ve got to do.

“After a few days you’ll feel better. You have got to keep yourself occupied, otherwise you will go off your rocker.”