Video: Our Basher is the only Victoria Cross recipient named on the new D-Day memorial 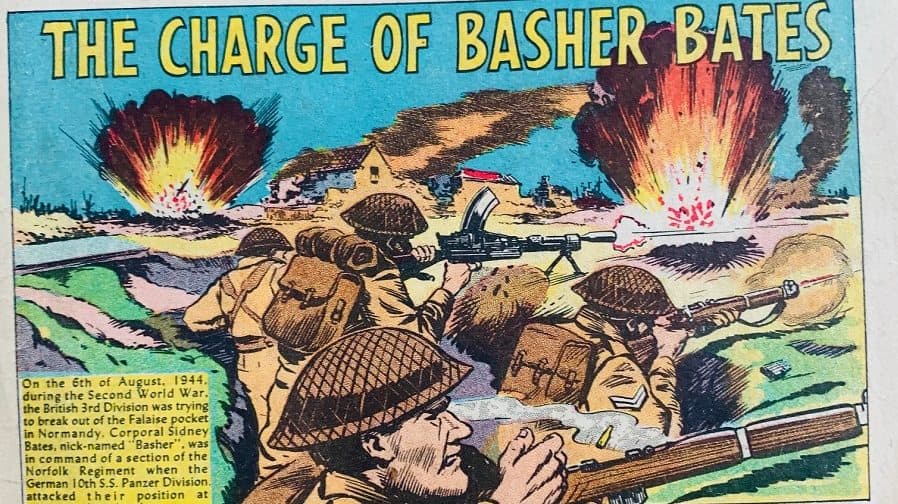 'The Charge of Basher Bates' in The Victor comic, kindly shared by DC Thomson & Co Ltd.

A Second World War hero and ‘true Camberwell boy’ is the only Victoria Cross recipient to be named on a new memorial to those who died in the Normandy Campaign.

22,442 names on the new monument at Ver-sur-Mer in France honour those who lost their lives on D-Day and during the liberation of Europe at the site where British troops first landed in 1944.

The Normandy Memorial Trust, which has raised funding towards the monument, is marking the 75th anniversary of D-Day with a series of videos telling the stories of the men and women who helped win the war.

Corporal Bates’ great-nephew Chris Bates is one of the many family members keeping his memory – and valour – alive. He has narrated a video telling his great-uncle’s incredible story.

The 2018 Southwark Blue Plaque runner-up, nicknamed ‘Basher Bates’, died fending off the enemy as a Corporal in the 1st Battalion of the Royal Norfolk Regiment, sacrificing himself to save his platoon after an attack on two sides by the German 10th SS Panzer division on the Perrier Ridge.

In the video, Chris, who was one of several people to nominate Bates for a Southwark Blue Plaque last year in which he was a runner, says: “He was shot many times as he ran, and he fell to the ground three times, only to recover himself and continue his advance.

“A mortar bomb exploding near him finally brought him down.

“Eyewitnesses have told me he seemed to wrap himself around the gun and continue to fire and change ammo magazines whilst his strength lasted.”

After an enemy retreat, Bates was taken to hospital and died two days later. He was just 23.

As Chris says: “I’ll never forget his incredible act of valour to save his mates. We will remember them.”

With thanks to the Normandy Memorial Trust and DC Thomson & Co Ltd.

Southwark NewsNewsVideo: Our Basher is the only Victoria Cross recipient named on the new D-Day memorial