Video: The original Big Knight In started in Walworth last month and has fed thousands of the poorest families in the borough

‘I wanted to recreate that sense of community now. I just asked during the club night for some money. I said give us 50p and I can get them a can of beans’ – Barrie Knight 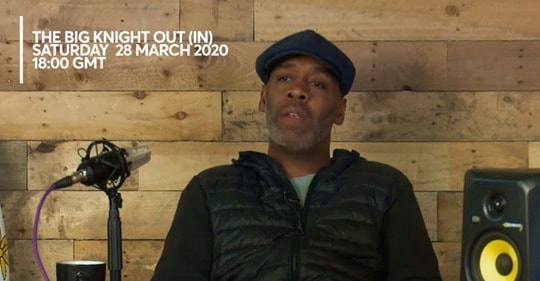 Tomorrow  (Thursday April 23)  the BBC are hosting The Big Night In, but it’s not the first of it’s kind since the country went into coronavirus lockdown – last month two Walworth legends hosted their first night in or should that be Knight?

For the idea of creating a night in of entertainment was the brainchild of Barrie Knight a self-confessed Walworth Roader and body guard to the stars. Alongside fellow Walworth Roader and DJ Danny Walters the two are well-known for their annual club night at the Elephant & Castle’s Coronet, which has seen thousands return to the area to re-live the heady days of disco, since it was first launched in July 2014.

On Saturday March 28, the pair hosted a live youtube club night with local DJs and stars including Ronan Keating and Keith Duffy.

They drew in an audience of 4,000 and on their second night Saturday April 11, it rocketed to 13,000 as word spread across the globe. “The Big Knight Out team wondered what we could do to spread a little happiness, so we decided to bring The Big Knight Out indoors,” Barrie told the News.

The club night, which originally started as a celebration of Barrie’s 50 birthday aims to relive for that generation the finest retro soul, funk and disco of their youth. “It was back in the day when us Walworth Roaders went for nights out at the Lyceum in the west end or along the Old Kent Road in venues like the Dun Cow, which is now a doctor’s surgery. And we got such a positive feedback that we did it annually – people that used to live in Walworth, Bermondsey, Peckham came back from their homes across the globe. And the same is happening with The Big Knight In, suddenly we found people in lockdown in India and Los Angeles tuning in.”

But its not all about dancing the night away nearly £6,000 has been donated to help Barrie and the team feed the poorest families living first in Walworth and then into parts of Bermondsey and Peckham.

“It’s not a foodbank,” Barrie explained, “it about us knowing as a community those in need and giving it to them. It started as I talked to the caretaker of a local primary here in Walworth. I asked him how it was going and he said some of the parents, many of them key workers, were asking for food.

“I know what it was like to live on school dinners, so many of us growing up in Walworth did. And during the six week’s holiday we often relied on our neighbours to help us out. I want to recreate that sense of community now. I just asked during the club night for some money, I said give us 50p and I can get them a can of beans.” Since then the former club promoter as recruited loads of people locally to lend a helping hand and has got the backing of Morrison’s on the Walworth Road. “They are giving me pallets of stuff. On fork-lifts and on to trucks and we are then bagging it up and giving it out. Last week I paid them £1,000 in cash and they gave me 50 per cent off and then a thousand pound more on top of that. They are doubling my food order. I hope this week to get 8,000 sanitary towels because it something you might not buy when you are on the breadline.

“At St Peter’s Church they were baking bread for old people, but had run out of flour. I got Morrison to give two concrete sack loads of the stuff and now that is going out.”

The internet is littered with photos of Barrie alongside huge stars including a famous moment when his seen lifting Keith Flint of the Prodigy at a festival twenty years ago.  His partner of the club night Danny Walters was also famously photographed giving Princess Di a high five when she visited East Street Market. Some of the line up at this Thursday’s Comic relief and Children In Need BBC fundraiser might be known to Barrie, so he could well have inspired the idea. To get invloved email bigknightin@yahoo.com

Southwark NewsNewsVideo: The original Big Knight In started in Walworth last month and has fed thousands of the poorest families in the borough