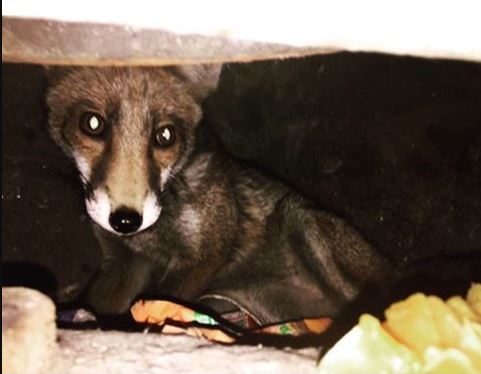 This is the heart-warming moment a trapped baby fox was rescued by concerned passers-by at Rotherhithe station, and released back to safety.

The cub, dubbed by her rescuers as ‘Sandy’, was discovered trapped behind some railings to the station’s platform one – as her nose was just about visible.

Rotherhithe resident Rhia Brown, 22, spotted the ‘distressed’ animal last week (July 2) and enlisted the help of Network Rail staff to return the fox to its mother, after the RSPCA was reportedly unable to give a time-frame to attend.

“I only noticed because of her little nose sticking out,” said the recent Criminology graduate. “I shone my phone and noticed it was a fox. “I refused to leave because it was like, this is just a baby. And I would say I’m a little bit of an animal rights activist, which is why I didn’t want to leave.”

The trio managed to lure out the fox with some biscuits into a position where one of the station staff could use gloves to pick up Sandy and put her in a box during the three-and-a-half hour rescue attempt. But not everyone was keen to help. “We were in that station for a while, at least fifty people walked past. One of them even said, ‘ugh, a fox’”, Rhia told the News.

Unfortunately, she did not manage to get the names of the staff who helped rescue little Sandy.

“I didn’t get their details, I just got a picture, said thank-you and left. One of them said, ‘that’s my first fox rodeo!’” she said.

A passer-by who had noticed the commotion stopped and helped Rhia to take Sandy to Stave Hill, where Sandy was released back into the wild. Video footage taken by the passer-by shows the little fox bounding out of the box into safety at the bushes of the nearby Stave Hill.

The RSPCA advises members of the public to “apply common sense” when rescuing distressed or injured animals such as foxes.

“Wild animals can scratch and bite when frightened, particularly if they are injured.  If in doubt, keep a safe distance and call us,” it advises.

The RSPCA’s website with guidance can be found at rspca.org.uk