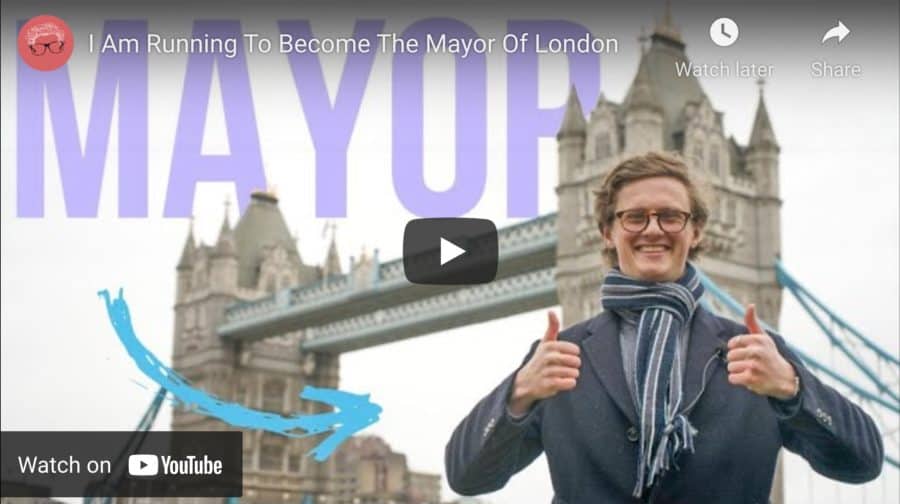 Max Fosh announced his campaign in a YouTube video titled, 'I Am Running To Become The Mayor of London'

A YouTube star has announced that he will be running to become the Mayor of London ‘just to get more votes than Laurence Fox’, writes Simon Throssell…

Max Fosh, 25, uploaded a video to his 375,000 subscribers saying that he is officially standing as an independent candidate for the next Mayor of London.

Under the slogan, ‘Let’s turn London up to the Max’, Mr Fosh will be running against incumbent Sadiq Khan, Shaun Bailey of the Conservatives, Sian Berry of the Green Party and his new rival, the actor Laurence Fox.

Laurence Fox made headlines in January 2020 after rowing with an audience member on Question Time.

In September 2020, he launched the Reclaim political party to ‘reclaim’ British values from politicians, who he says have ‘lost touch with the people.’

Explaining why he is running, Max said: “There is always a posh bloke on the ballot and so I thought I’d fulfil that quota. But on this occasion, I’m not alone.”

Max and Laurence both attended Harrow School, at different times, and were members of the sixth form debating society; something Max believes makes them ‘as qualified as each other to be London Mayor.’

“I would like to officially add my name to the ballot list just to get more votes than Laurence Fox,” Max continued.

“Who do you think would win? A political party with five million pounds of backing or one YouTubey boy with a few hundred thousand subscribers?