CDs and football shirts were taken from the memorial. 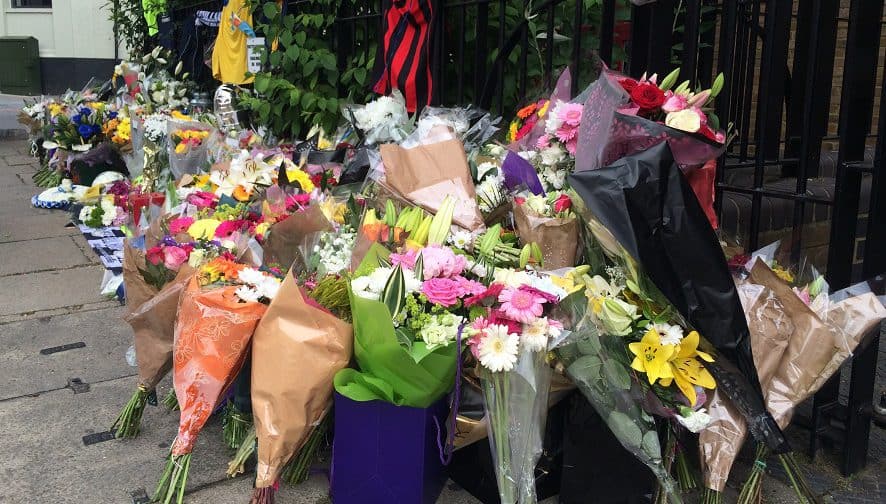 Thieves who stole tributes left at a memorial shrine for Tommy Blackmore have been slammed as “vile” and “disrespectful” by outraged mourners.

Since the 20-year-old Bermondsey boy’s passing on June 13, hundreds of flowers, cards, candles and gifts have been left in memory at Queen Elizabeth Street by grieving friends and family.

Last Sunday, his heartbroken brother discovered that callous crooks had stolen football shirts and CDs from the memorial, as well as a nitrous ‘cracker’ used to inflate balloons.

Neil Coyle, MP for Bermondsey and Old Southwark, said that the thieves’ actions were “so disrespectful and grim” and urged local police to scour CCTV footage to find those responsible.

He told the News: “It is just so insensitive. For Tommy’s friends and family, the memorial is a way of helping them grieve, of helping them come to terms with his passing. The people who stole these sentimental items are denying them the chance to do this.

“It’s just so disrespectful, so insensitive. It’s an incredibly grim thing that I can’t understand. I would urge those responsible, if they are reading this, to return the stolen items. I think it would be a decent gift to Tommy’s friends and family if the items were returned.”

He added that he had asked Southwark Police’s borough commander Zander Gibson to analyse the area’s CCTV network, which he praised as being “brilliant.”

He said: “The CCTV control centre at Borough Station, co-run by Southwark Council and the Met, is a great facility and has been used to stop and solve crimes in the area. Hopefully we can use it to find those responsible.”

Mourners reacted with shock and disgust on social media.

One person said on a tribute Facebook page: “Absolutely vile – how can anyone do something like that? It’s so disrespectful. Shame on them.”

Another added: “The one thing they can’t steal is the love and respect you all have for Tommy. They don’t know the meaning of the words.”

Tommy died following an incident at Queen Elizabeth Road in the early hours of June 13. He was found “critically injured” and died soon after being rushed to hospital.

Floral tributes for Tommy Blackmore laid at the scene of the incident.