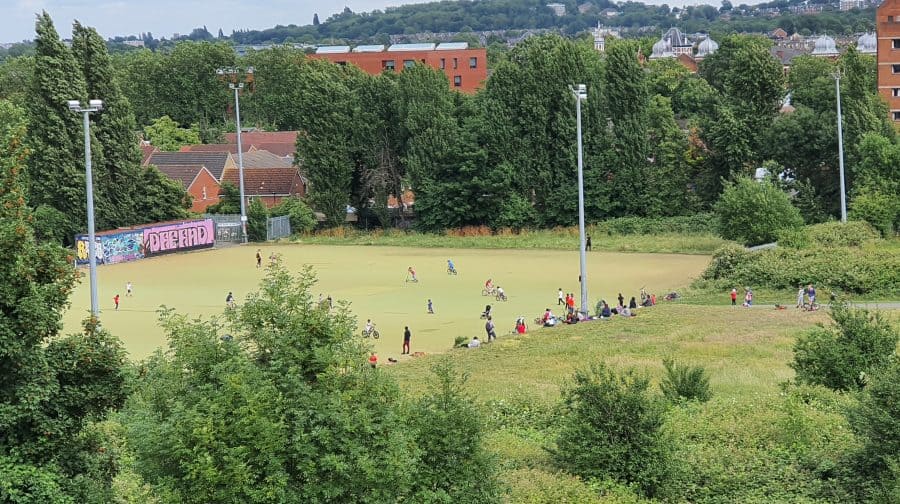 Contested plans for a new Dulwich Hamlet stadium will be put to a vote at the end of July, writes Kit Heren…

Southwark Council’s planning committee is set to decide on the proposals on July 27, which would see the club and property developer investors Meadow Partners build a new 4,000-seater stadium on Greendale playing fields to make room for 219 new homes on the site of the current ground at Champion Hill, which is next door.

But local residents group Friends of Green Dale and green space advocates Campaign for the Preservation of Rural England have spoken out against the plans, warning of a loss of communal space and pointing out that Greendale is Metropolitan Open Land (MOL) – giving it protected status.

Mayor Sadiq Khan’s London plan says: “The strongest protection should be given to London’s Metropolitan Open Land and inappropriate development refused, except in very special circumstances, giving the same level of protection as in the Green Belt.”

Despite this, planning officers have recommended that the council approve the proposals, arguing that the new development meets the “very special circumstances” requirement in principle – while also raising concerns about the impact on the local community.

The plans also go against recommendations made by the Ecology Consultancy to Southwark Council to make Greendale a site of importance for nature conservation. The consultancy said in a 2015 report: “The site probably offers one of the few remaining accessible areas of natural habitat in the local area as most nearby open spaces are managed for amenity and recreation.”

The planned housing falls short on affordability requirements, with 73 of 219 homes – or 33 per cent – deemed affordable. Of these, 52 homes would be socially rented. A planning document says that “in terms of habitable rooms this would equate to 35.4 per cent” – taking it just above City Hall’s general affordability threshold. Meadow Residential say that they would add in another four affordable homes if they won a mayoral grant.

The plans also provide for a new public play area and a ‘linear park’.

A spokesperson for Friends of Green Dale told the News: “We respect the club’s fans and the club’s reputation. We know that many members of [Dulwich Hamlet] DHFC’s family do great work.

“However, the Friends of Green Dale object to the DHFC/Meadow planning application. Amongst our concerns, we understand that our community of Camberwell and East Dulwich will not have free access to the sports facilities.

“The use of Green Dale astro turf is thriving. Despite the fact it has not been cared for as we would wish, our community loves it. It is surrounded by a green curtain that protects our children and young people from pollution. The replacement Multi Use Games Area is smaller than Sport England recommendations and is next to the Sainsbury’s delivery area so there is a risk of pollution…

“DHFC was made homeless and now it is subjecting our great community to the same treatment.”

Alice Roberts of the Campaign for the Preservation of Rural England warned Sadiq Khan in January that “the redevelopment of the stadium should not be at the expense of much-used and valued natural open space, including a well-used community football pitch.”

Dulwich Hamlet and the club’s supporters trust said in a joint statement: “This is the moment our fans have fought long and hard to see happen, to secure the long term future and objectives that can only be delivered by this scheme – allowing the club to remain owned by its fans and stay in the heart of its community.

“We go into this committee on the back of continued and overwhelming support from our fans and the local community and the club would like to thank everyone for their support over the years, both in keeping the club going and demonstrating their backing for the plans.

“Without you all, the corner could never have been turned and we hope the committee will approve the application and allow the club to continue in its new direction, adding sporting provision and facilities in Southwark to the work we already do in the community.

“The club and the trust are respectful of the fact that there has been some local opposition to the scheme primarily due to the renovation and enclosure of our derelict astro turf pitch but, after long and careful consideration of that and all other factors, the planning officers at London Borough of Southwark have recommended that the application should be approved.

“We believe it is important to listen to different views and opinions before conclusions are reached and it was encouraging to see not only that the council’s process allowed everyone to have a voice, but also the vast majority were in favour of the plans.

“We would like to thank all of you who have asked for updates, since the application was submitted, for your patience but it was important to invest the time required to address every concern and idea raised.

“We have been committed to engaging positively with all stakeholders to deliver the best possible scheme, which means the application that will be presented is submitted both with the support of the community and the positive recommendations from the council and other consulting authorities.”