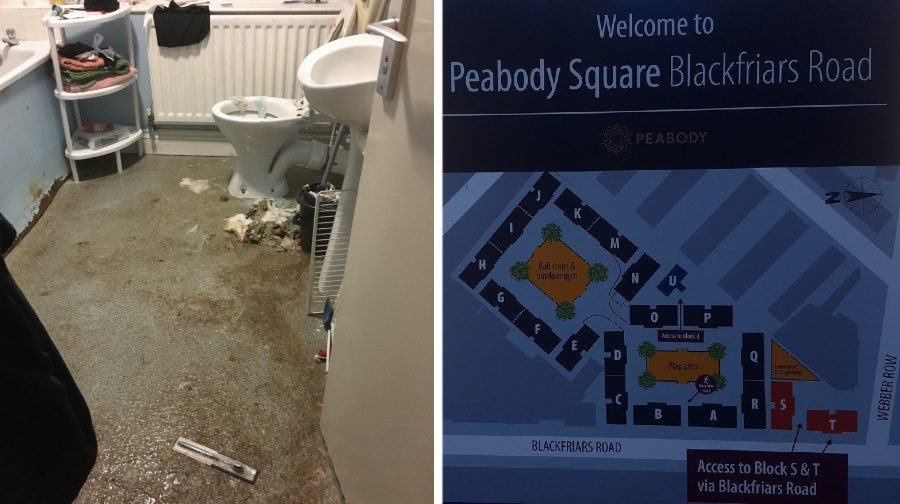 A vulnerable pensioner was forced to use plastic bags and bottles as a toilet for a week after the plumbing inside her Peabody flat broke.

Theresa Emery, 72, began experiencing problems in August, which put her toilet out of action for a whole week.

The problem appeared to be fixed at the Blackfriars flat – only for the same problem to happen all over again at the end of December, spewing sewage all over her home.

Her daughter, Jackie, moved her mother in with her at her home in Buckinghamshire in December.

She says she has been trying and repeatedly failing to contact the landlord, Peabody, for repairs.

“Trying to get someone at Peabody to attend, inspect and support my mum is like cutting a brick with a plastic fork,” she said.

Eventually, the problem with backed up sewage became so bad that a neighbour called the Fire Brigade over the second incident, and Jackie was contacted.

“The fire brigade gained access to the property, and there was poo everywhere,” said Jackie. “Her bathroom was flooded, and Peabody didn’t send anyone to clean it up or anything.”

Peabody said a deep clean has now taken place – but family say this was actually carried out by them and not the landlord.

Theresa said she felt upset at the lack of formal apology from Peabody, saying nobody had come around to check on her after the incident in August.

“Somebody comes and goes, but they don’t solve the problem,” she said. “And not one person has come to ask how I am coping.

“Everytime I think it’s been solved, it comes back again. I just want them to see what’s causing the problem, why can’t they find out what’s wrong with it?

“Having your house flooded with someone’s faeces, it’s so distressing.”

A Peabody spokesperson admitted there had been delays to repairs, and apologised.

“We know that this plumbing issue has been difficult and we’re working hard to resolve all the issues for Ms Emery,” he said.

“We make every effort to minimise disruption and also ensure a timely completion of repairs.

“Unfortunately there have been some delays in this case and we have apologised to the family.

“A deep clean took place on 9 January and our surveyor has identified works to the flat.

“We are also planning to change the bath into a wet room and are awaiting an Occupational Therapist report so all the works can be carried out at the same time. We are in regular contact with the family to progress this.”

No surprise there . Peabody are too busy building flats for the rich to bother with repairs for social housing residents . They are just glorified estate agents who have Southwark Councillors in their pocket and all their money in Coutts Bank. Just look on the internet to see what they do