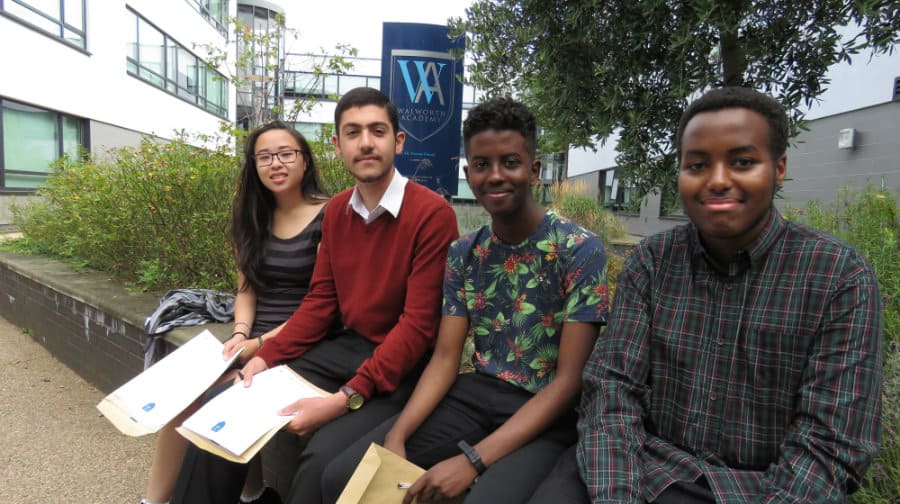 Walworth Academy pupils have spoken of their “disbelief” after receiving top GCSE results, while one students was preparing to enrol at Eton College and a career in politics.

Sixteen-year-old Ahmed Robel made the News in March when his school announced that the prestigious Eton College, whose alumni includes princes William and Harry, as well as former prime minister David Cameron, had offered him a scholarship.

Ahmed, who came to the UK from Somalia as a youngster, told the News: “I was quite nervous, especially this morning. There was a lot of what-ifs riding on this.

“I got four A*s, four As and two Distinction* grades. I am really pleased. I wasn’t really expecting them to be honest but I put in a lot of hard work, so I’m really happy that I got them.

“My family have always been a big inspiration. My sister taught me to try and do anything I want to.”

Ahmed said he couldn’t wait to study History and Politics at Eton, and has aspirations to one day become a politician himself.

“I have been interested in politics for a while. All politicians who go into politics for the right reasons, to affect a change, are inspiring to me. That is what drives me,” he said, adding that his first visits to Eton have felt “amazing”.

“I have met a few of the pupils I will be spending time with. They were all really nice, everyday people – not like the stereotype people have of Eton.”

From Walworth to Eton, Ahmed Robel collects his grades

Meanwhile the school located off Albany Road will say farewell to its head girl Jennifer Chenh, as she moves onto the BRIT School of performing arts, which has produced such talents as Marsha Ambrosius and Adele.

After opening her envelope to find four As, four Bs, a Distinction* and an A*, Jennifer told the News: “I am most proud of my A* in English Literature; and I got an A in Maths and an A in Music.

“I’m going to start studying next week at the BRIT School for performing arts. I need to prepare. My main instruments are piano and violin, and I can also play bass, guitar, and a bit of drums.

“I think my parents will be really happy, we’re going to go and celebrate later with a meal out. It’s going to be sad to leave Walworth Academy, but I will come back to visit as often as I can.”

He said: “I feel amazing. Honestly I never thought I would get so many As. I was predicted to get good grades but I didn’t really believe it.

“I’m looking to do Maths, Physics and Economics at A-level. My teachers were really helpful along the way.

“Further down the line I want to go into business, maybe stock broking.”

Feeling “relieved” to have the pressure lifted off his shoulders, Ismail Hashi, who achieved three A*s, four As, three Bs and a Distinction*, told the News: “I felt very nervous this morning. I was unsure what I would get for my A-level prospects, but now that I’ve seen them I am reassured, it feels great.

“I was most worried about English for sure, as prior to doing the exams I was on a B grade, and I was astonished when I saw I got an A* and an A.

“I’ve been at the school since year seven. I got a lot of support form the teachers. Especially my Maths teacher Mr Amasowomwan maths and Miss Toworfe who has been my English teacher. I wasn’t that stressed about GCSEs from year seven to year nine, but when I got to year ten I thought I better get my game on. I studied and revised every day and it seems like it has paid off.”

The school’s principal, Yvonne Powell, told the News: “The great thing this year is so many children who were borderline and managed to get over the A-C barrier.

“We have managed to improve so many pupils’ life chances and that’s the biggest achievement for me.

“We have also had the highest number of pupils this year who have met the criteria to carry on with their A-levels here. So we will have the biggest year twelve and year thirteen cohort we have ever had in September; not just for the sake of it, but because so many of our CGSE students have made it there.”