After several visits from contractors for a free kitchen re-fit, the couple's cooker and washing machine won't work 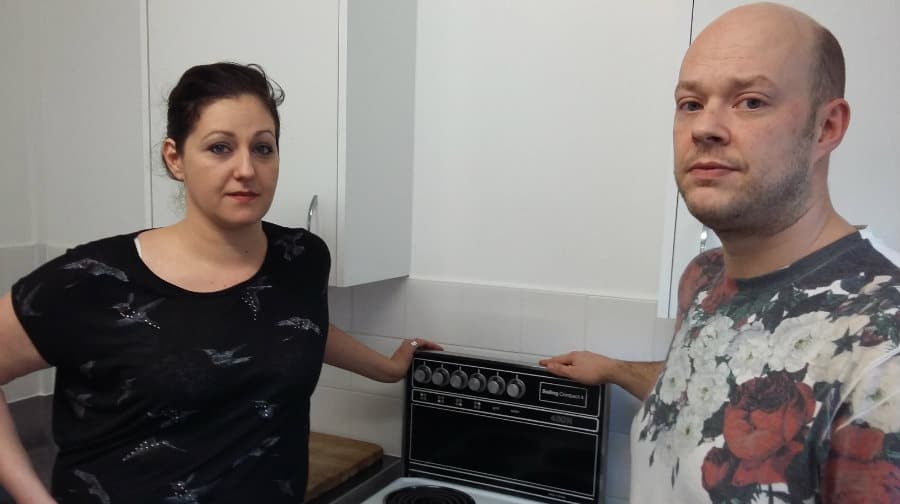 Couple fed up after a week without use of their cooker

A Walworth couple have been eating sandwiches and rice for dinner for two weeks after a council refurb of their kitchen left them unable to use their oven.

Out of the blue, Dan Andrews and Rachael Webb, both 34, had contractors from A&E Elkins Ltd visit as part of the council’s kitchen refurbishment scheme.

The couple was delighted, but after the job was finished on January 26, they found the electricity in their council flat tripped if they tried to use their cooker.

“It’s ridiculous, we have been eating nothing but sandwiches and rice ever since, and they are doing nothing at all to help us,” Dan said.

The contractors insist they did the work properly. But after workers came to re-inspect the job on February 3, Dan and Rachael started having the same problem with their washing machine.

Dan, a former draftsman, said he felt “disgusted”. “It has been like banging our heads against a brick wall. The council and the contractors are trying to fob us off. It’s disgusting to be honest,” he said.

“They keep saying it’s our cooker that’s faulty, but it was perfectly fine before. And we are both on Employment Support Allowance – we don’t have money to buy a new cooker.

“We’re starting to run out of money because of all the times we have had to eat out, and now we can’t clean our clothes.

“We seem to be in some grey area where the council won’t accept liability or listen to any suggestion they should compensate us for all of this, but the contractors won’t take the blame either.”

Dan and Rachael were told by one worker that there was “nothing” they could do, because their fuse box contains a safety device that switches off the flat’s electricity if there is a fault with an appliance or circuits.

The free kitchen refurbishment from the council was part of a 2015 local Labour Party election pledge to refit all council house kitchens over thirty years old.

Dan said: “If it’s happened to us, then we might not be the only ones having this problem.

Cllr Richard Livingstone, Southwark Council’s cabinet member for housing, said: “We have been installing new electrical wiring, including a safety device that cuts off electrics in the home if there is a problem with appliances or electrical circuits.

“Unfortunately in this case, the cut off device has kicked in because of a fault in the electrical appliances, particularly the cooker, which is causing the electricity to trip.

“We do appreciate that the safety work we have undertaken means that some tenants may have to replace or upgrade their appliances, and that there is a cost associated with that.

“We can offer help in situations like this and I have asked the resident services team to contact Ms Webb and Mr Andrews urgently to see if they are eligible for any of the financial support we can offer, or for advice regarding where to purchase affordable white goods.”