'Everybody would just gather there at 54. My Nan’s brother would sing; he had a voice, everyone said, like Tom Jones. Then one of the family would play the piano' 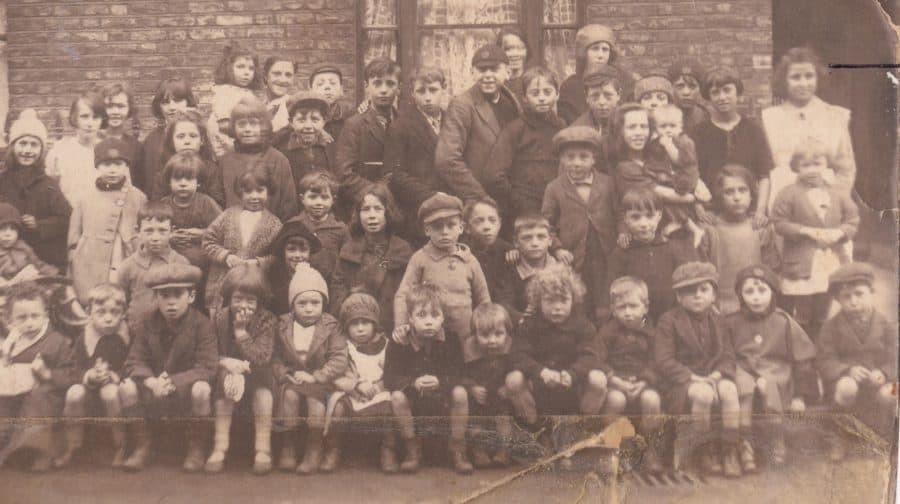 All the kids of Henshaw Street. Probably early 1930s. Rose is the one in the white, far right, back row.

As part of this month’s Walworth History Festival, local history enthusiasts have been researching their family history.

Forty-eight-year-old Joanne Sumner, who lives in Petts Wood, Kent, has a strong connection to Walworth through her mother’s family, who originate from Henshaw Street.

Her great-great grandparents, Margaret Pickering and Alfred Newell, a printer, lived at number 54.

Joanne’s nan, Rose Waring, nee Newell, was born in 1920. She lived on the street for an incredible 80 years, and raised Joanne’s mother there too. The pair spent Joanne’s childhood visiting the Walworth street.

“My Nan was so well known in the road, she was a very central figure in the community.  Nan knew everyone.

“I spent a lot of my school holidays with her and got to meet all her neighbours.  As a child, I knew all the colours of the doors, odds and evens, with the double doors together at the front,” she said.

“I remember the little low walls at the front of the houses because they didn’t have gardens, just a small yard, with high walls between each property. “You only had a little area in front of your lounge window with room for the odd plant pot or two.

“I’ve been told that in pre-war times, the low walls had metal railings and, like very many properties during the war, they got taken down and the metal used for armoury.

“In the summertime, everyone used to sit on the front walls.”

Rose often took the young Joanne to East Lane Market: “What should have been a minute’s walk would take half an hour because you would stop and chat to people sitting on the front walls. It was terrific.”

And, even in her later years, Rose continued helping the street’s elderly residents, picking up their newspapers for them.

The family was not well off, and in the 1950s Rose became a single parent and struggled for money. She worked the odd cleaning job and also turned her hand to sewing and making and repairing clothes, with a reputation as an accomplished seamstress.

“My Mum Lea, when she was a young lady, wanted to go out at weekends and desperately wanted new outfits. But money was tight, so my Nan couldn’t afford to buy them so every weekend she would make my Mum a new outfit.

“Nan was known for her dressmaking. She made a lot of bridesmaid’s dresses and outfits for weddings of people in the street”.

Number 54 was host to some big street parties, and the community also became closer as children grew up and went on to marry friends nearby.

“Everybody would just gather there at 54. My Nan’s brother would sing; he had a voice, everyone said, like Tom Jones. Then one of the family would play the piano. They would make their own entertainment as there was no television in those days,” Joanne recalls.

“One of my nan’s sisters married one of the Powells.  My Nan’s oldest sister married into the Chesney family. You’d probably have five or six properties that were all related by marriage.

“Some of the families then moved to Chatham Street, which runs parallel”.

Rose had been a life-long renter, for many decades the landlord was a Mr Sampson but, eventually, a larger company bought the property.

Even in the 1990s the old building was outdated and in dire need of renovating. It still didn’t have central heating.

After the family complained, the company offered to relocate Rose, but the family decided that as she was now in her 80s, they wanted her to live closer in Kent, and received a financial payment from the then-landlord to do so.

Thank you Joanne for sharing your Henshaw Street memories, it was really interesting to read about a street I have never visited but many members of my family have lived in. I have been researching my family history for the last two or three years and Henshaw Street came up in so many census and electoral roll documents for different members of the family from the 1960’s back to the late 1800’s. I imagine some of my distant family members knew your family as one of the girls at number 56 Henshaw Street (the Morris family) married into the Chesney family too! It was great seeing the old photograph of Henshaw Street children, it left me wondering if any of my family were in the photo. Thanks once again for the interesting read.

Hi Terry
Thanks for your message. I do not have anyone by the name of Venn in my family but would be most interested in any information you may have on Henshaw Street and its residents. The surnames of those in my family tree that have lived in Henshaw Street are Denyer, Morris, Barham and one or two others!
Regards, Lorraine

Hello, my brothers and I were born in 78 Henshaw St, lived there until I was ten, then we moved to in the early 60’s. My eldest brother Fred remembers a lot about the street. Regards Pat.

Hiya I knew your Nan Rose well. I lived in the street from 1961 to when I left home in the late 70svmy mum and Dad left after the Sampson & Tuckwell Estate sold the street in the 80s. We lived at number 7 and my Nan and Pa at number 72. Funnily enough my Dad who is 91 now was remembering the other week how he asked Rose to make a kilt for him. I last went back the street in about 2000 with my wife and Rose was still living there and recognised me and we had a cup of tea as she kindly showed my wife what the houses are like inside. Your Nan was lovely and a part of my childhood.