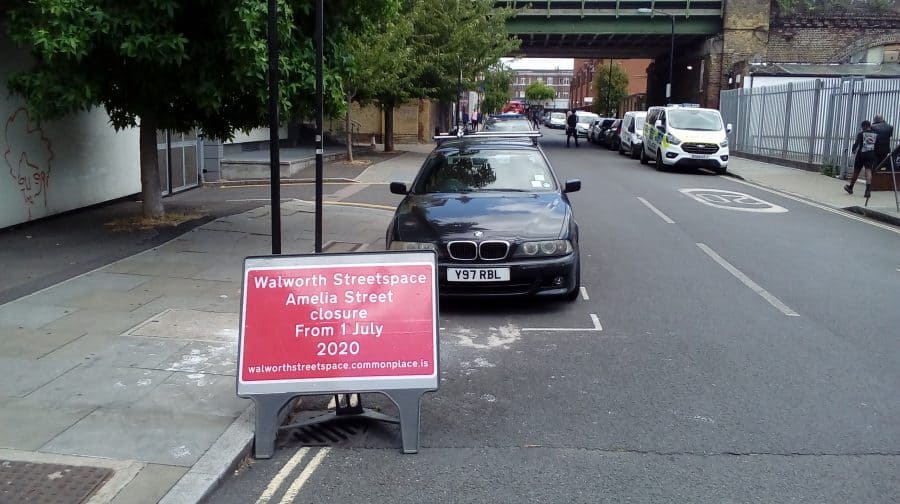 Southwark Council says it will cap the number of fines it hands out for driving through new road restrictions and scrap some charges altogether after a report into financially crippling charges featured in the News.

Tickets issued between November 22 to January 5 will now be limited to three, with the first ticket cancelled if a warning notice was not received beforehand.

Last week this newspaper detailed how dozens of drivers had unwittingly found themselves with three and four figure fines from multiple penalty charge notices after driving through new road restrictions in Walworth; at Manor Place and Braganza Street.

Since our first article we have been made aware of many more people affected in other ‘low emissions neighbourhoods’ across Southwark, including in Dulwich Village. It is not known how many people are affected – but it is likely to be in the hundreds. Similar complaints are now being reported in neighbouring boroughs.

One unsuspecting driver, a Penton Place tenant, told the News she had three tickets in one week after driving to and from hospital treatment, fines which she appealed but had to pay.

No right hand turns, timed restrictions, and roads that are now closed to traffic but open to cyclists and walkers have all had a mixed reception since being implemented from July 2020.

And although there are many compelling arguments for and against the schemes, one certainty is that the sheer number of fines and huge sums would be financially ruinous to people already struggling from redundancy or reduced incomes during the pandemic.

In some cases, drivers said signage was unclear or not visible in the dark, or that as they do not live in immediate area they had no idea restrictions had been put in – especially if signs were vandalised.

Although the schemes have support from many groups including those keen to reduce the volume of cars using side streets as rat runs, and climate and air pollution groups, the speed at which the wholesale changes were put in place has created tensions – and teething problems.

Southwark Council’s cabinet member for leisure, environment and roads, councillor Catherine Rose, told the News this week that the council had already started refunding some drivers.

“Despite our signs and advance warning letters, some people have regrettably received multiple tickets,” she said.

“Anyone not receiving a prior notice letter will also have their first ticket quashed.

“We are contacting all those affected and will be issuing automatic refunds where appropriate. “Anyone who wishes to appeal remaining tickets, can do so.

“Moving forwards, we will work to make any essential adjustments and give the scheme time to settle in.

“It is a new trial, and will be open for resident feedback in six months from its introduction.

“The hope is that the measures will help to free local streets from commuter traffic and open roads up for local people to walk, cycle and play.”

The next question is whether, given the High Court’s latest judgement on the mayor’s rollout of the schemes, all tickets ultimately have more grounds for appeal.

The whole scheme is a shame. How many cyclists are on the roads? They can’t keep closing roads that are meant and paid by drivers. Tfl have already destroyed our main roads based on pollution. By the way, how do they measure the pollution in the areas or are they just merely collecting extra revenue from drivers by Southwark Council? Its ridiculous as we do not have the numbers cycling. Our major roads are clogged up and it takes longer for a 5 minutes journey to 25. Its all about revenue and they should publish how the scheme is reducing pollution with the differences.

The stated intention of these road closures is to eliminate ‘rat-run’ traffic from using residential Walworth streets to cross from the Old Kent Rd, to the Walworth Road, to Kennington Park Road, and to improve air quality, and encourage more walking & cycling.

However there are some negative consequences of these road closures. Many elderly residents are dependent on using their cars infrequently to do a weekly shop in a supermarket, or attend doctors or hospital appointments. It is unlikely that the over 70’s will take up cycling en-masse, and it would be unsafe if they did. Forcing residents onto (non socially distanced) busses in the middle of the covid pandemic is an act of madness.

Southwark should make an exemption for local Walworth residents, from being fined for using local roads. This can easily be done by cross referencing the home addresses of the registration plates captured by ANPR against the council tax database, to identify local residents & make them exempt from PCN fines. A scheme could be put in place where local residents can apply for an exemption would be fairly straightforward to set up.

My company has numerous electric vehicles but are still banned from bus gates and LTN’S what is the point ubers can but we can’t making deliveries to elderly pregnant shielding isolating residents etc has added extra mileage congestion delays and almost impossible to deliver.
Thank-you southwark for your greed and stupidity imposing this nightmare on us.