What should be the next big question put before the smokers of Herne Hill? 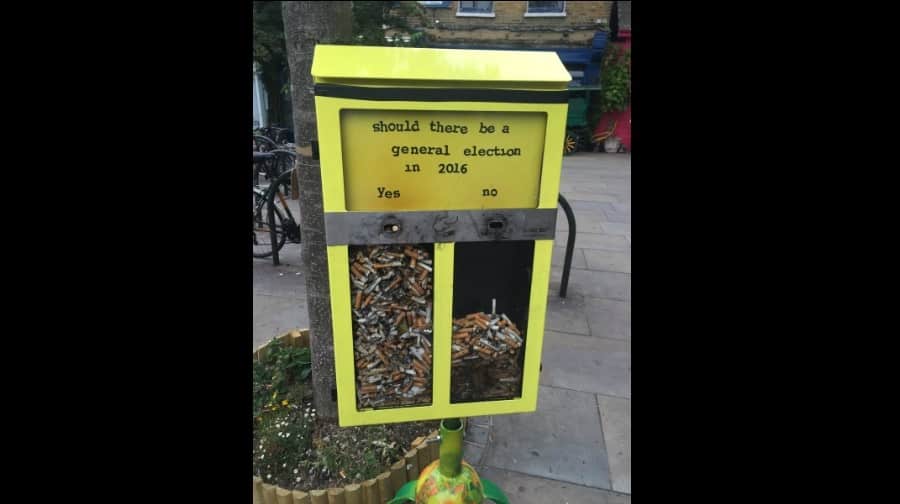 The smokers of Herne Hill demand a general election. That’s according to the irrefutable polling of an ashtray Ballot Bin, which appeared at the railway station four weeks ago.

After the EU referendum turned Britain’s political system upside down, Giles Gibson, chair of the Herne Hill Forum, decided the people needed something light-hearted yet topical.

So on July 7 he erected this Ballot Bin – where smokers could discard their butts in a side to vote ‘yes’ or ‘no’ – and by August 1, the question: “Should there be a general election in 2016” had been given a resounding “Yes”.

Giles told the News: “It seems to be a land slide. This was a way to highlight the issue, and it was quite fun.

“It turns out Herne Hill was the local area which voted most heavily in favoring of staying in the EU, and we’re in Lambeth, the area of England that was also most in favour. You could probably claim that Herne Hill is the most pro-EU place in the UK.”

Now Giles has the idea of making another one, only he has yet to decide on a question.

“I think it needs to be on some kind of issue, maybe it could be ‘is smoking bad for your health?’

“It doesn’t necessarily need to be political, but we do want to keep it interesting. Then again, maybe it should ask whether people would rather have Theresa May or Jeremy Corbyn as prime minister?

“Maybe we will get non-smokers to think of ideas for a question to ask the local smokers?”

The bin itself, was designed by a charity called the Hubbub Foundation, whose environmental campaign, Neat Streets, aims to find innovative ways to reduce litter.