The memorial to the 22nd battalion of the Queen’s Regiment had been dismantled during building works to 2 Old Jamaica Road. 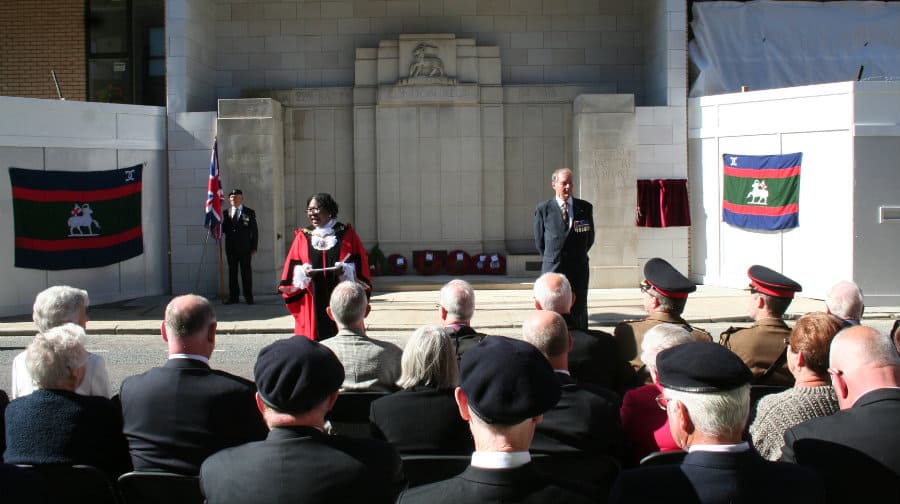 The sound of trumpets blaring and boots stamping filled the air last weekend as a war memorial to 920 fallen Bermondsey men was officially rededicated.

A brass band played military tunes while Army Reserve soldiers, cadets and re-enactors marched in formation at the ceremony in Old Jamaica Road on Saturday morning.

A crowd of around 150 people, including veterans of later conflicts, attended the service.

The memorial, which pays tribute to the 22nd battalion of the Queen’s Regiment, had been taken away for safe keeping while the old military training centre at 2 Old Jamaica Road was demolished.

The Grade II-listed memorial, which was built in 1921 thanks to donations from Bermondsey people, has now been reinstalled on the front of a new block of flats.

The site’s military history began in 1883, when a unit began using a nearby drill hall for exercises.

In 1915, the recently-established 22nd battalion set off to take part in the Great War, which saw hundreds of Bermondsey men fighting valiantly on the Western Front and in the Salonika Campaign in the Balkans. By the end of the war, 970 Bermondsey men fighting in the regiment had died, their names forever inscribed on the memorial.

On Saturday, remembrance wreaths were placed at the bottom of the memorial by Bermondsey and Old Southwark MP Neil Coyle and Mayor of Southwark Dora Dixon-Fyle, following a two minute period of silence and reflection. Cllr Dixon-Fyle told the audience: “My hope and my wish is that the rededication will remind all who pass this way, and all who call this building home, that others also walked this way before serving the country with honour and dedication. As long as we shall live, we will remember them.”

Dora Dixon-Fyle, the Mayor of Southwark, unveiling a new plaque

The Kohima Epitaph was also recited by the Old Comrades Association chairman Major Maurice Nason, who said: “When you go home, tell them of us and say, for your tomorrow, we gave our today.”

The ceremony ended with a blessing of the memorial by the Bishop of Southwark and a rendition of the national anthem.

Members of the 22nd battalion during WW1

How lovely to see this! My father is in the photograph – back row, second from left. I am thinking of him particularly this year (2015) when it is 100 years since he embarked for France and the horrors of the Somme. He was born in New Cross in 1894 and signed up in Jamaica Road with two friends, neither of whom returned.