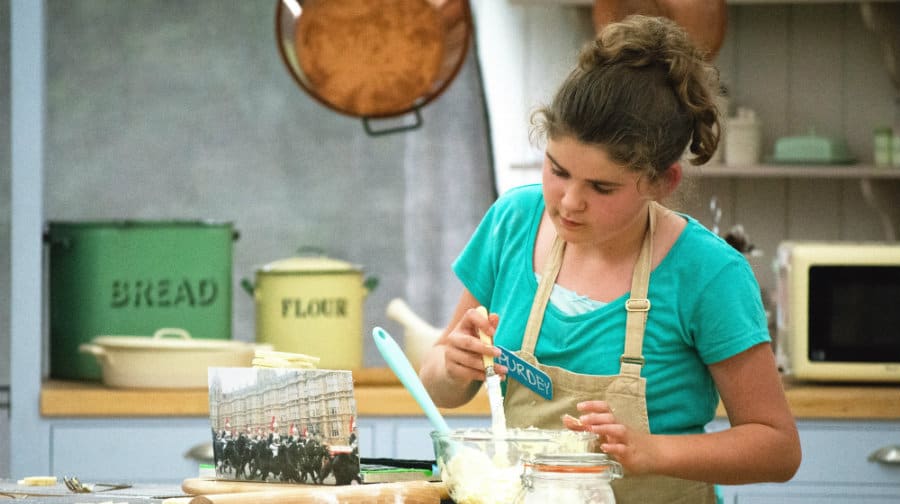 Purdey on the Junior Bake Off

A little girl from Herne Hill worked around the clock to create a show-stopping Big Ben out of biscuits, securing her a place in Britain’s top ten junior bakers.

Purdey Burton, twelve, has been baking since she was five, but nothing had prepared her for competing in the Junior Bake Off – a version of the Great British Bake Off for children on CBBC.

In her first round, the Mary Berry fan rose to the challenge as she made a hundred mini-meringues with three different flavours in an hour, before embarking on her timely masterpiece. When asked to recreate an iconic building out of biscuits, Purdey struck on the idea of building Big Ben because her father works in the House of Lords.

She flavoured her shortbread with oranges and lemons (with a nod to the ‘bells of St Clements’) and then sandwiched the layers together with buttercream and optimism.

“I stacked them all the same size and just hoped for the best that it wouldn’t fall over,” said Purdey who spent the whole of her summer holidays practicing. “When I finished it I was really proud of it.”

After a tense round of judging, Purdey creamed the competition to go through to the quarter finals with ten other children whittled down from thousands of applicants.

“I couldn’t believe it,” said Purdey, who regularly shares her bakes with her neighbours. “I was completely shocked, I couldn’t even talk. I walked off and told my mum and just started crying. I rang my dad on the way back he was screaming, I was absolutely gobsmacked,” she said.

Purdey (front, at centre) with contestants on the CBBC show

In the next round disaster struck in the tent as Purdey attempted to make chocolate orange tarts decorated with cherry spiders. “I was really pushed for time and I dropped one of the tarts and had to bake it again. It fell over and went splat and I was thinking ‘oh my gosh how am I going to do this?’. Two of them were underdone so I was a bit annoyed with myself,” said Purdey, who admitted to being a bit relieved to be leaving the pressure of the Bake Off tent when she was not selected to go through to the semi-finals.

“When they didn’t call my name out I was kind of half relieved but disappointed,” said Purdey. “I’m just thrilled I did it. I’ll never forget the experience. Everyone was so lovely and I’m never going to forget being one of one of the top ten bakers in the country,” she said proudly.