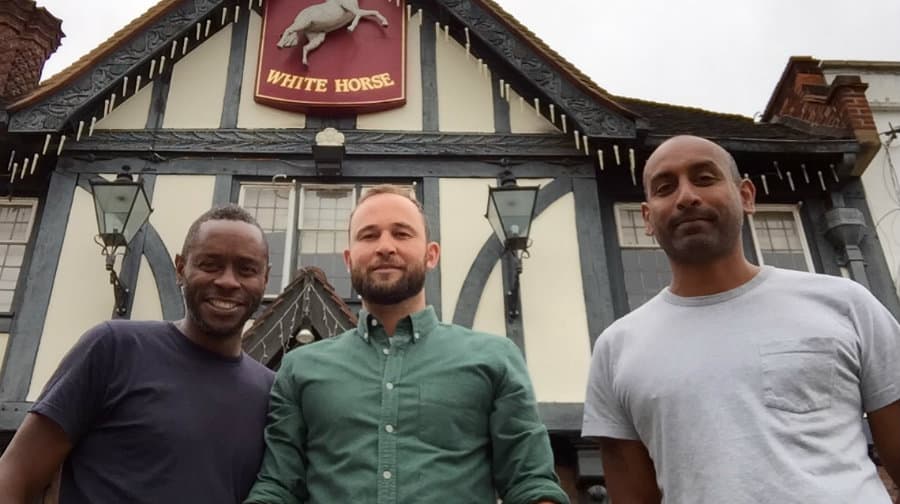 The new owner of a pub which has been run by the same couple of more than 30 years, has said they want to keep the ‘heart and soul’ of the ol’ boozer while bringing it up to date.

Last month Michael ‘Hogie’ Hogan announced that he and his wife Mary would be stepping down as much-loved landlord and landlady of the White Horse on Peckham Rye.

After 33 years behind the bar, it was a “difficult decision” for Hogie, according to new owner Isaac Tooby – one of the co-founders of Parched Pubs Ltd, who approached Michael and Mary a year and a half ago.

“It was a big deal for him,” said Isaac, who saw the potential of such a “huge a beautiful site” for serving a modern British menu alongside real ales.

Parched Pubs already run the Montpelier around the corner in Choumert Road as well as The Roebuck and The Trinity in Borough.

“We’re very much already in the community in Peckham,” said Isaac. “We don’t want to completely change the business – we just want to add to it in a positive way.

“We just want to make our mark on an already fantastic place. We want to keep the heart and soul of the place alive.”

Since September 13, 1982, when Michael and Mary opened the doors of the White Horse, it has become a hub of the community and a meeting place for various sports teams including the Dulwich Harps and the South East London Giants.

Dulwich Ladies at the White Horse with their newest team member

Harps Treasurer, Marianna Graham, said the club was now looking for a new home after more than ten years of getting a hot curry and a cold drink at the White Horse after playing on the Rye.

“The amazing service and easy going nature of the Hogan Family ensured that the club always had somewhere to go and it is with sadness that the club has had to say goodbye to this great venue,” she said.

“It’s going to be a difficult time for the club trying to find a pub with the same high standards and everyone at the Dulwich Harps  would like to thank the White Horse for their continued support and wish them well in their future endeavours,” added Marianne.

The Hogans have recently taken over the Duke of Sussex in Friary Road, which will be run by son Fintan, while Michael and Mary settle in to their new home in Ireland.

The White Horse will be opening its doors again this weekend until it closes in October for a “full refurbishment.” When it relaunches at the beginning of November Isaac promises the pool table and the darts board will still be there but they will no longer be showing sports on the big screen.