Wed-Den bells for Millwall fans who tie the knot 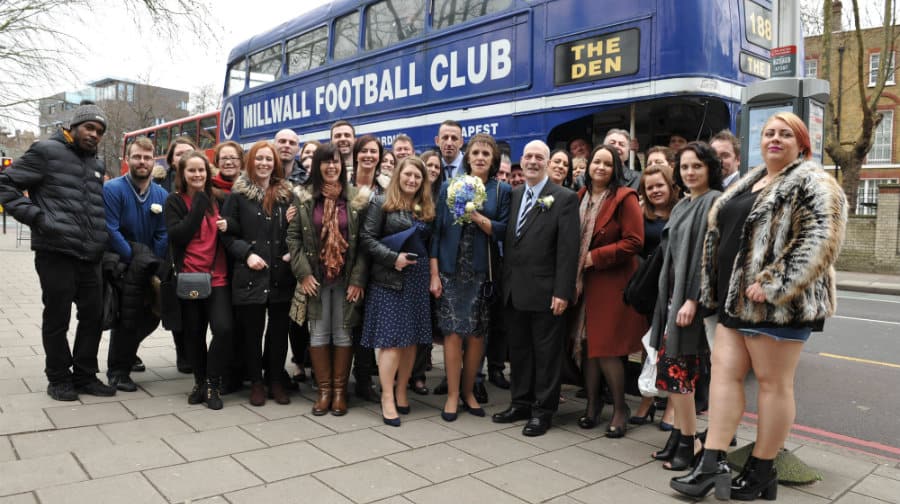 A Millwall-mad couple celebrated their wedding with an on-field appearance at the Den last weekend – just hours after they had walked down the altar and tied the knot.

Chris Prete and his beloved Sue Keegan married at the Southwark Registry Office on February 20, before being whisked away by the Millwall fans’ bus to the Windsor Pub in the Old Kent Road for a pre-match pint.

Bermondsey boy Chris said: “When I first met Sue ten years ago, I started taking her to Millwall. We now go to every home and away game and have only missed a handful of games in the last eight years. I served on the Millwall Supporters’ Club committee for five years and write for The Lion Roars fanzine. So you can see: Millwall means everything to us, it is our social life.”

The happy couple then made their way to the Den, where there were invited onto the pitch as a wedding day treat. Waiting in the tunnel, the pair were delighted when Lions players Jimmy Abdou and David Forde shook their hands. Others went a little further.

Chris, 57, said: “Steve Morison gave Sue a kiss in the tunnel, which made her day!”

On the field, the players continued their generosity with a very special wedding gift: three points in the form of a thorough 3-0 win over Peterborough United.

After the game, Chris, Sue and their family and friends headed back to the Windsor for their wedding reception, which was offered for free by the generous landlady Bridget. There, the wedding party celebrated the marriage and the win with some slices of a specially-designed Millwall wedding cake, which was created by a Chelsea-supporting friend. The couple met shortly before Chris suffered a stroke in 2008. Sue, 59 helped nurse him back to health and they have been inseparable ever since.

Unfortunately, due to the stroke, Chris is unable to work and the couple only had a shoe-string budget for the wedding. Luckily, he said, the generosity of his friends and the club ensured a “heart-warming” day.

Chris and Sue are spending their honeymoon in Doncaster this weekend – where Millwall just so happen to be playing their next league game.

Southwark NewsNewsWed-Den bells for Millwall fans who tie the knot