Mum-of-four Heather, said: "I want Tideway to know we’re serious, we’re not joking – this is going ahead.” 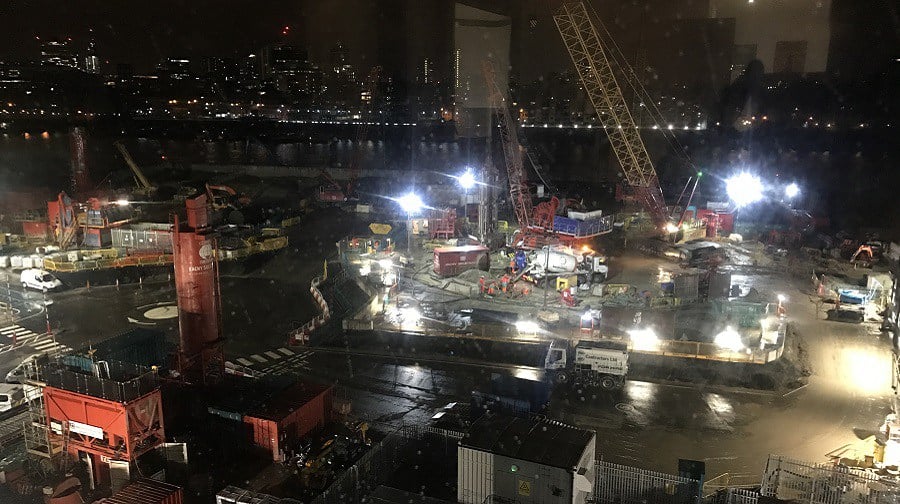 A group of Bermondsey mums are planning to peacefully blockade a 36-hour concrete pour for the Thames Super Sewer in protest at the impact on their children.

A continuous concrete pour is needed at Tideway’s worksite at Chambers Wharf to reinforce the underground structures of the £4.2billion project.

However, the pour is likely to face disruption at the hands of local mothers living by the site, in a row over the work’s impact on their children’s health.

Mum-of-four and Chambers Way resident, Heather Mulkerrins, who has helped organise the demo said: “I want Tideway to know we’re serious, we’re not joking – this is going ahead.”

Up to fifteen mothers have pledged to blockade the one entrance and exit gate to where the concrete pour is taking place, preventing as manty as 300 lorries from gaining access on Friday morning.

The demo has been sparked in part because of respite and mitigation measures given to those facing the worksite, but not those living facing away from it.

“My place doesn’t face the site, so they’re saying we’re not affected. But just because we don’t face it doesn’t mean our children aren’t affected,” said 31-year-old Ms Mulkerrins.

“We’re hoping they’ll know in future that they’ll have to treat us equally. I think we’ve just had enough.”

Two of her children have respiratory problems, she added, which would be negatively impacted by any pollution from the concrete pour.

A Tideway spokesperson said the work was needed to stop sewage pollution in the Thames and that it works with the community to minimise disruption. “At the start of our project, an Independent Compensation Panel was established to enable residents living near our sites to apply for mitigation and support if they felt they were adversely affected by the work involved,” said the spokesman.

“The panel is formed of independent experts ranging from health professionals to noise specialists, and each decision is based on an individual’s circumstances – including proximity of their home to the site, health and other personal circumstances.”

The panel wouldn’t comment on individual cases, he added.

As the News has reported, Chambers Wharf campaigners have previously launched legal action over the super-sewer construction, arguing residents’ needs for mitigation from noise and pollution had not been sufficiently addressed.

Construction of the major 16-mile tunnel is due to be completed by 2024.

A friend who lived in the block of apartments directly facing the Chambers Wharf site who opposed Thames Water’s proposals had his property bought by them before work started. His financial settlement is a secret because Thames Water imposed a gagging order on him. Another friend in Fulham, near the Carnworth Road tunnel site had his property bought by Thames Water and had the same gagging order imposed upon hm. Both were members of local campaigning groups who opposed the tunnel in favour of green, sustainable solutions that were never properly studied. This consisted of a combination of measures including in-sewer controls, green roofs (the most energy efficient), rainwater harvesting, street trees and pocket parks, converting roads with porous asphalt and other, less costly solutions than the tunnel. The tunnel is in fact a detention tank and not a sewer. The stink from ventilation shafts will affect neighbours in perpetuity. The irony is that the water quality of the Tideway already meets Environment Agency standards without the Tideway Tunnel. This is the result of the £ billions already spent on upgrading Thames Water’s sewage treatment works and most significantly, commissioning of the Lee Tunnel in 2016 that reduced spills to the Tideway from 40 million to 18 million tonnes (of mainly rainwater and not sewage). The tunnel will go down in history as one of the biggest blunders of our government. Knowing this doesn’t help the families whose lives and health are affected by the construction works. You can be assured that none of the so called experts advising Tideway or Thames Water’s communications department live anywhere near any of the tunnel construction sites.

Roland Gilmore the majority of your solutions were and are outside of Thames Water remit and powers. That why they weren’t looked at. They schemes for the London Mayor an other organisations to implement over a much longer period.