We did it! We’ve raised more than £100,000 for Evelina London Children’s Hospital thanks to Southwark

After four long years of amazing feats of bravery and generous giving, we have raised £100,000 for Evelina Hospital 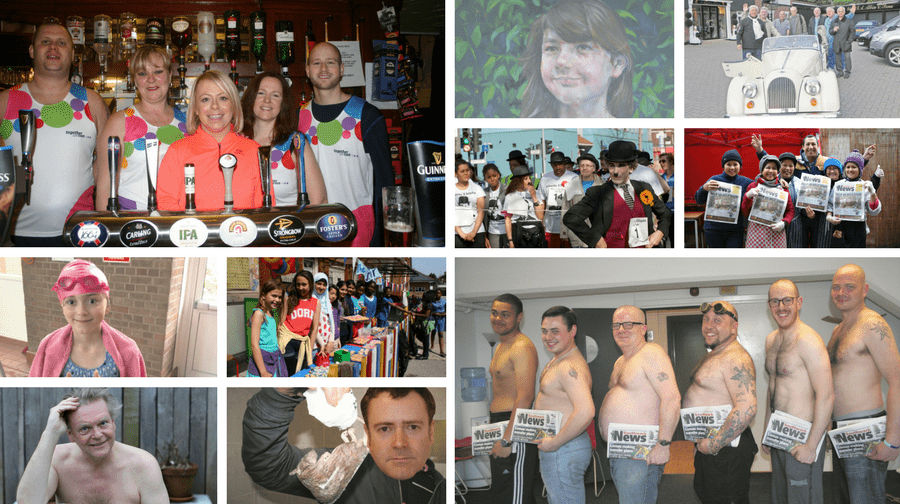 Last week we told the stories of two extremely premature babies who were receiving care in the neonatal unit at Evelina London Children’s Hospital as we closed in on our £100,000 fundraising target for the hospital.

In the next few days after we published their story, we finally smashed our target – and it’s all thanks to the generous people of Southwark.

After the News hit the shelves on Thursday, we received a huge anonymous donation of £1,000 from a member of the community and several other donations – taking our total to £100,603.00.

The money will all go towards funding vital equipment for Evelina London to help save the lives of extremely poorly babies.

It has been a long and emotional journey over the last few years, ever since the News came up with the ambitious idea of raising £100,000 for Evelina London, an amazing local children’s hospital.

The team at the News has been overwhelmed by the show of support from the community who have knitted, run, swum, climbed, sung, painted, raffled, and stripped off to raise money for our Evelina Appeal.

Here, we take a look back at some of the  ways readers helped us hit our goal.

Thank you to all who helped!

A band of brave men, ranging from train guard, to tattoo artist, film producer, mechanic, and local politician, bared all in front of a 150-strong crowd at an Old Kent Road pub – after being put through their paces by News advertising manager Tammy Jukes.

The show ended in classic style, of course, with only a policeman’s hat, rather than a helmet, covering the men’s vitals.

In what was probably Bermondsey’s first ever Full Monty, the daring group managed to raise about £2,500 through ticket sales and proceeds from the bar. Well done lads!

Councillor bares all for Evelina:

Labour councillor Nick Dolezal stripped down to his birthday suit and posed in freezing temperatures in a bid to get people to sponsor him to keep his clothes ON.

He said he felt compelled to compete with rival councillor Mark Gettleson, who got his kit OFF as part of the News’ Full Monty performance.

Council leader spends day in the life of his staff:

Southwark Council leader Peter John spent a day taking on some of his staff’s toughest jobs, from sifting through filthy rubbish, to catching rats and cleaning the town hall, to drum up cash for the appeal.

The ‘secret world’ of recycling was unveiled over the course of a weekend at Southwark’s waste plant, and a lucky visitor scooped tickets to Paris and lunch at the Eiffel Tower.

Over £205 was raised for the appeal, with more than 500 people turning up to explore the site, which was opened as part of Open House weekend.

During the annual ball to mark the ending of the mayoral year, then Southwark mayor Abdul Mohammed raised more than £8,000 for the appeal.

The raffle and the auction raised more than £4,000, which was then matched by Barclays Bank to double the total.

Southwark Metal goes above and beyond:

In April 2014 the generosity of a family run Bermondsey firm gave the News appeal for Evelina a massive boost.

After visiting the children’s hospital with the News a month earlier Tom Pratt from Southwark Metal wrote a cheque for £20,000 taking our target well over the half way mark.

Based on the Old Kent Road, this scrap metal business started off in a yard in Borough in1980 with one shed, one elderly employee named Albert and an Alsatian called Oi, but is now a multi-million business, with a share in Westminster Waste.

“Evelina is not new to us,” Tom said at the time.

“My dad was treated there as a child when he was just seven or eight.”

Construction firm Standage, who were working on a Bermondsey estate at the time, handed over a £200 donation for the Evelina Appeal to St Saviour’s resident Audrey Lupton.

Locals donned their bowler hats and walking sticks to help raise cash for the Evelina appeal during a sponsored Charlie Chaplin run down Walworth Road to celebrate the legend’s birthday.

Publicans Julie and Moss O’Sullivan, who run the Old Bank pub on Southwark Park Road, hosted a fundraising event at the Blue Market Square, drafting in punters and local businesses to help raise £3,000 for the appeal.

The gang found the swim to be an amazing experience – and managed to raise £8,000 for the appeal.

News MD Chris Mullany, who launched the Evelina appeal, completed six fundraising events over the four years, and helped to raise some £20,000 towards the total.

Chris flew out to the Sahara desert in April last year to take part in the gruelling 160-mile Marathon des Sables – the toughest footrace on earth. The race took place over seven days, with competitors facing temperatures of up to 120 degrees Fahrenheit, while they scaled dune fields and djebels rising to the height of Ben Nevis.

Competitors had to carry ten kilo rucksacks, with all their food for the week, clothes, sleeping bag and medical kit, including a venom pump and a signalling mirror and flare. Organisers said it was the hottest, hardest and longest one yet, with 140 people dropping out or being evacuated out of a starting field of some 1200. Chris lost a stone in a week, but finished 553rd, just making the top half of the field, and managed to raise more than £3,000.

He also led the team Channel swim, (left), swam the three mile Hellespont strait between Europe and Asia, completed the News team Three Peaks in under 24 hours, and in the space of a month climbed the highest peak in Africa, Mount Kilimanjaro, and cycled from London to Paris in 24 hours.

All of his challenges were financed by himself, with all monies raised going to Evelina.

“What we’ve raised is just a drop in the ocean – and the Evelina will always need local support,” Chris said. “Their needs don’t stop because we’ve hit this target – so please get in touch with us if you have any fundraising ideas!”

The fee went straight to the children’s hospital. It took around 30 hours to paint Chloe, sitting in Annie’s back garden in Nunhead.

Six News and Weekender staff members, joined by an estate agent, local councillor and reader, attempted to turn mountains into molehills while climbing the summits of the UK’s three highest mountains as part of the Three Peaks challenge.

Bermondsey funeral director Barry Albin-Dyer donated £500 after a race around Italy in a classic car.

Barry hammered the hand-built two-litre Morgan around the twisting turns of the 1,000-mile course of the Mille Miglia.

Pupils were also encouraged to wear an outfit made up entirely of their favourite colours and took part in tombola and a ‘guess how many sweets’ competition.

Thai restaurant Bangkok Kitchen agreed to donate 50p from every delivered order – and drivers donated their tips for three weeks.

Co-owner Farhen Enver was once a patient at the hospital and said he was keen to give something back.

St Peter’s Church, in Liverpool Grove, Walworth, knitted small blankets for premature babies to match the measurements of an incubator or cot at the hospital.

Wendy, who runs the Good Intent in East Street, Walworth, decided to run the marathon for Evelina as a way to give something back to the hospital where surgeons saved her daughter’s finger back in 2010.

Jamie dramatically changed his lifestyle to get fit enough for the marathon with a personal trainer, while Cllr Rosie Shimell took in the sites of Southwark during her training for the 26.2-mile challenge.

Kelly, known as Miss Copley where she works at St Joseph’s Primary School, in George Row, was so keen to put in the miles ahead of the event that she was put under doctor’s orders to take it easy in the run up to the big day.

Mary Magdalene gets on board:

Children of all ages at St Mary Magdalene Primary School, in Peckham, joined up to help the appeal.

More than £600 was raised by generous drinkers at the Old Salt Quay, in Rotherhithe, through comedy and live music nights.

Regulars at Camberwell’s St George’s Tavern raised more than £100 through a bike-bound collection tour around the borough.

Vikki Chapman set out to raise more than £1,000 after her son Harvey was treated at the hospital.

Staff at Arments pie and mash shop dressed up as a wide array of colourful characters, including a giant panda, Barney Rubble and Luke Skywalker to convulse wildly to the first 30 seconds of the bass-filled Harlem Shake song – all in the name of charity

Surrey Square Primary School pupils, in Walworth, raised £400 through a non-uniform day, with each child donating £1 to the hospital.

Hebe takes to the pool:

Nine-year-old Hebe Barber, who was a patient at Evelina after contracting eColi at the age of two, raised £510 after swimming 65 lengths of a 25-metre pool within an hour.

A Slimming World group in Brockley organised a ‘Slim for Good’ challenge to raise money for the appeal.

A film crew who used The Den and some footballers as part of a science documentary made a £150 donation.

Gavin Tiffin, a hospitality manager at St Thomas’ Hospital, cycled more than 280miles from London to Paris before hitting the streets in four marathons in Paris, Vienna, London and Madrid.

The Cinema Museum, in Lambeth, held a raffle during its Saturday Morning Pictures screening, which gave the older generation a chance to step back in time and for the kids to see the fun their grandparents once had.

Gary Marshall organised a jumble sale and raffle at the Millpond tenants’ hall in Jamaica Road.

Bermondsey’s Reg Perry beat pool champion Andy Breen during a fundraising event. He was among several challenging Breen, who was ranked eighth in the world.

Tesco donated £500 as part of its re-launch of a store in More London.

Southwark NewsNewsWe did it! We’ve raised more than £100,000 for Evelina London Children’s Hospital thanks to Southwark