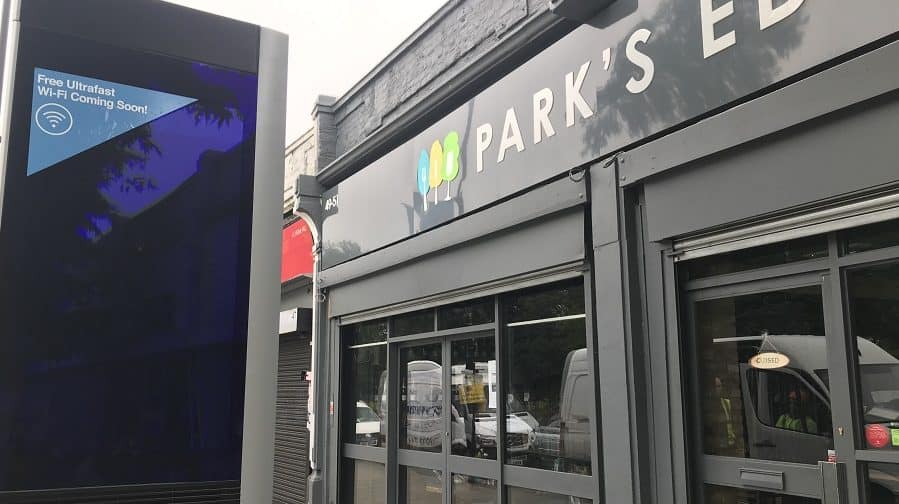 The new InLink installed outside Park's Edge on Monday

The manager of a restaurant in Herne Hill has told of her fears a new InLink tower installed outside could destroy the fledgling business.

Park’s Edge restaurant opened in October 2017 on Norwood Road, named after its view over Brockwell Park.

But the restaurant’s managers (pictured)  believe its future is in jeopardy after Southwark Council gave planning permission for an InLink’s phone and WiFi tower to be installed on the pavement right outside.

General Manager Claudia McKenzie says the shop-lined road already does not get quite the same footfall as elsewhere in Herne Hill.

She told the News that since moving in to the area, she and her colleagues have been working with many of the long-standing traders next door – which include Olley’s Fish Experience – to improve the road’s reputation. BEFORE: Managers Claudia and Amber, with the InLink base before it was fully installed

“We want to be a more central part of Herne Hill”, she said. “There are some long-standing and hardworking shop keepers on Norwood Road who people will travel to visit, but I think the road has an undeserved reputation of being slightly out of kilter with other well regarded roads in the area.

“To put something like an InLink here means our business will suffer as well as the standing of the road.”

Southwark council gave InLink the go-ahead despite objections from the restaurant, the Herne Hill Society and Herne Hill Forum – and despite the fact that two old phone boxes have been removed from other areas of Herne Hill.

Ms McKenzie suggested other sites, such as the pedestrianised station square and says she has had no explanation as to why outside her restaurant has been chosen. The base of the tower was fitted last week, with work completed on Monday.

“We had our first dog making use of it yesterday,” Ms McKenzie told the paper on Sunday.

“It will attract the wrong type of behaviour and I think it is our absolute disappointment that the council has failed to listen to local traders’ concerns.

“We are a young business and we are trying very, very hard to prove our food credentials. A lot of time and investment has gone into setting up this business but we are not there yet.

“Having an InLink right outside will be a huge set back.”

A spokesperson for InLinkUK told the News it had followed the ‘necessary statutory planning process’ with a full application submitted in February and approved in April, and said it was unable to comment on the council’s consultation process.

The spokesperson said InLink had been unaware of residents’ objections and got in touch with Ms McKenzie when she had directly contacted them, which led to them placing the InLink on the boundary of the restaurant, slightly further away.

“Unfortunately the other sites the owners suggested have pedestrian safety and highway restrictions or risks which means they are not suitable as a site for an InLink,” the spokesperson said.

“We have committed to continue to engage with Park’s Edge and hope to find a way to support their business with the InLink’s screens in due course. AFTER: The new InLink, fully fitted but not yet online, on Monday

“The InLinks are proving a popular service for the communities we are in with over 100,000 unique Wi-Fi subscribers and we’ve saved users over £352,000 in free calls.

“We have also been supporting small businesses utilising the screens to promote their services, alongside the content the team at InLinkUK create to engage and connect communities.”

Southwark councillor Kieron Williams, cabinet member for jobs, skills and innovation, said: “While the planning decision was made using the normal process and any objections would be considered as part of that, we want to try and support our local businesses and have been looking at a possible solution.

“In this instance it looks like an alternative location could be used away from the front of the shop, with a non-material change to the existing planning permission.

“BT has been advised of the issue and we hope they will respond positively.”