Who were the blonde-haired ‘Coronation Twins’ pictured in this remarkable WWII photo? 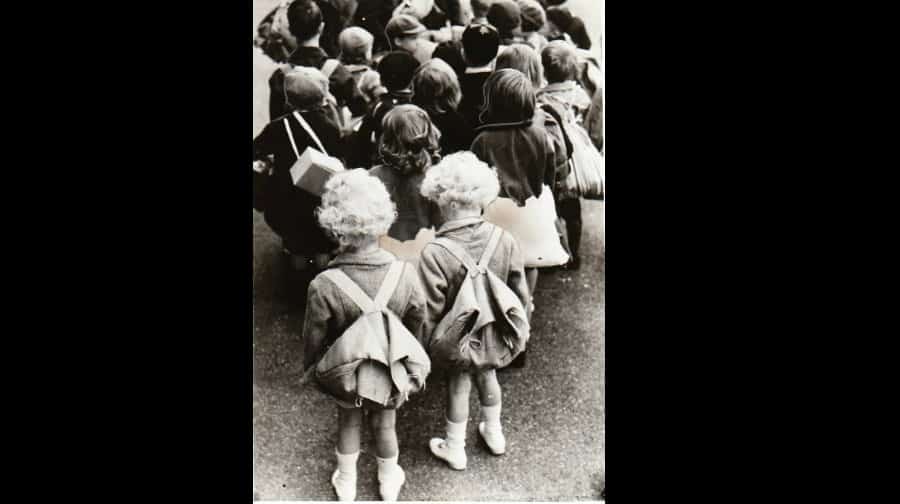 Do you know George and Albert?

A historian writing a book about World War Two evacuees is searching for two men who, as small children, were the subject of a remarkable photograph taken as Britain was on the cusp of war.

The black and white snap from August 1939 shows a line of young children, with two curly-haired blonde boys at the back wearing matching outfits and bags.

Historian Gillian Mawson is trying to get in touch with the pair, who would now be aged 78, for a book she is writing about evacuees, due to be published by Pen & Sword this year.

She has spoken to hundreds of people who were moved from cities during the war, but is desperately trying to get in touch with the photo’s mystery boys for a Southwark view. She believes the pair were born in the borough and called George and Albert Davies, earning them a memorable nickname.

She said: “Their nickname was ‘The Coronation Twins’ because they were born on the day that King George 6th was crowned.”

The pair were christened with a nod to the king’s full name: Albert Frederick Arthur George.

“I am a writer and historian with a passionate interest in the life stories of ordinary people,” she added, explaining that the photo was taken “when London school children took part in an ‘Evacuation Practice’ just a few days before millions of children were actually evacuated.”

Many Southwark children were evacuated when the area was bombarded by the Nazi Luftwaffe during WW2. From October 7, 1940 to June 6, 1941, well over 1500 bombs dropped on Southwark, along with another 20 parachute mines which were equally devastating.

The Blitz is still having an impact to this day. In March last year, 1200 properties were evacuated when a huge unexploded ordinance was discovered near Grange Walk, while another WW2 bomb was discovered in Salter Road the following month.

Do you know George or Albert? Please email joey@www.newsatden.co.uk with any information.

Southwark NewsNewsWho were the blonde-haired ‘Coronation Twins’ pictured in this remarkable WWII photo?