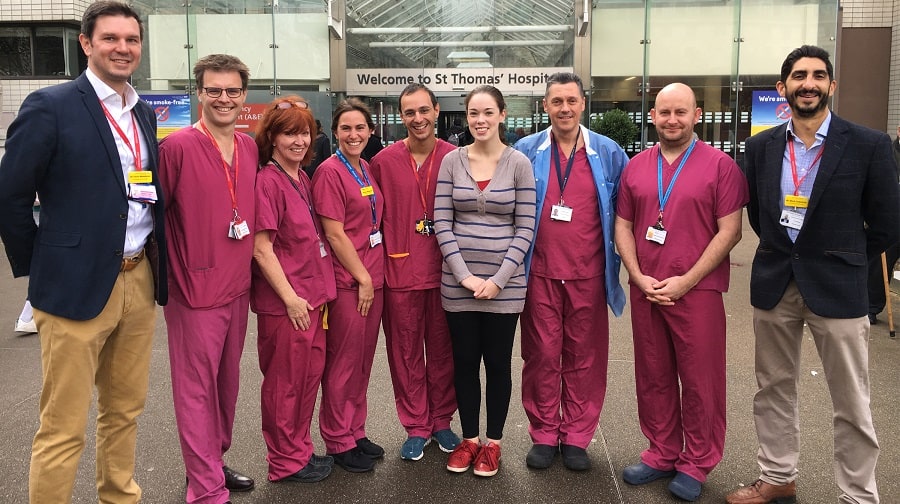 A woman who nearly died from a deadly strain of meningitis is now training to become a nurse at St Thomas’ Hospital – where doctors saved her life.

Sophie Royce, 25, originally from Surrey, was given a one per cent chance of survival when she was struck with meningococcal septicaemia and her organs began shutting down five years ago.

Unable to stabilise Sophie, doctors arranged for a specialist team from St Thomas’ to travel to her local hospital to put her on an ECMO (Extracorporeal Membrane Oxygenation) machine which temporarily replaces the work of the lungs or heart, and then brought her back to their hospital.

After a two-month fight against the disease, Sophie was well enough to return home.

Sophie, who worked as a child minder before she became ill, said the experience made her revaluate her life and decide to become a nurse.

She is now in her final year of an adult nursing course at London South Bank University and is doing her practical training at Guy’s and St Thomas’ NHS Foundation Trust, which includes St Thomas’ Hospital.

“There’s no way I would have considered becoming a nurse if it hadn’t been for what happened to me,” said Sophie, who now lives in St George’s Circus.

“I was in hospital for a long time and being around nurses and seeing the difference they make to patients made me realise that’s what I wanted to do.

“It was a lovely coincidence to find out that I would be doing my training at Guy’s and St Thomas’ after the teams here did so much for me.

“It’s nice to think that I was a patient here once and now I’m able to do nursing and help other people.”

Sophie said she owed everything to the ECMO team and recently nominated them in the Ultimate Lifesaver category of The Sun’s Who Cares Wins health awards.

“I wouldn’t be here without them – there is no question of that,” she said.

Dr Nick Barrett, consultant in critical care, said: “Thankfully Sophie made a slow and steady recovery with the therapies we provided. It is amazing to see how well she has recovered and it’s fantastic that she is now joining the nursing profession.

“Seeing the difference ECMO can make to patients like Sophie is why we do what we do. It is only thanks to the work of a big team – consisting of nurses, perfusionists, physiotherapists, dietitians and consultants – that we are able to save lives.”

St Thomas’ is one of just five hospitals to provide an ECMO service across the NHS. Sophie is now an ambassador for the Meningitis Research Foundation, which supported her during her recovery. For more information visit www.meningitis.org