'The thought of losing my ability to play was heartbreaking' 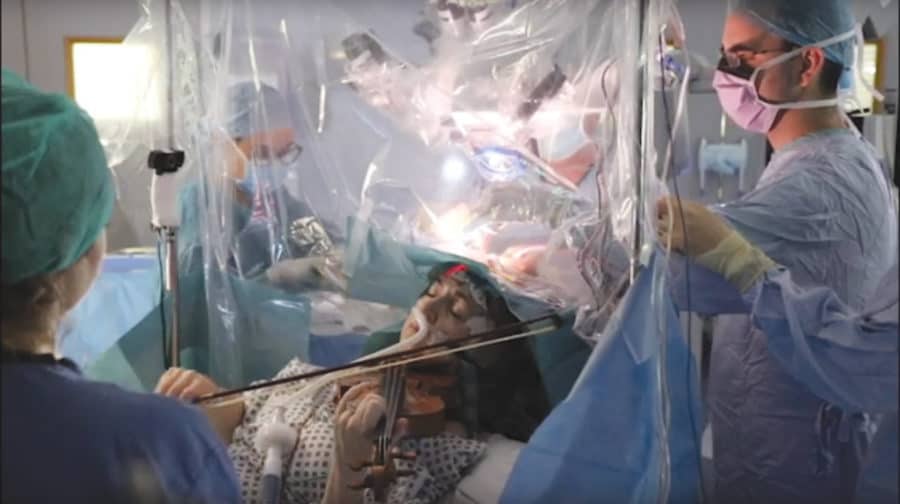 A King’s patient played the violin while surgeons removed her brain tumour at King’s College Hospital.

Fifty-three-year-old violinist Dagmar Turner was woken after an opening was made in her skull and brought round from the anaesthetic.

Doctors then handed her the violin to play, as the tumour was removed, to make sure the surgery did not affect the parts of her brain used while playing music.

The idea came from Professor Keyoumars Ashkan, a consultant neurosurgeon at Denmark Hill, who is also an accomplished pianist with a degree in music.

He understood Dagmar’s worries that the operation to remove her large, slow-growing brain tumour could stop her from playing and performing again.

Dagmar, plays in the Isle of Wight Symphony Orchestra, was diagnosed with a brain tumour in 2013 after suffering a seizure while playing a symphony.

She was given a biopsy and treated with radiotherapy at her local specialist hospital but despite treatment in autumn of last year doctors discovered the tumour had grown and become more aggressive.

Its location was also particular cause for concern, as it was close to the right frontal lobe of her brain, an area that controls movement in her left hand.

Professor Ashkan spent two hours carefully mapping her brain to identify the areas that were active while she played before the operation.

“We perform around 400 tumour removals each year, which often involves rousing patients to carry out language tests, but this was the first time I’ve had a patient play an instrument,” he said.

“We knew how important the violin is to Dagmar so it was vital that we preserved function in the delicate areas of her brain that allowed her to play.

“We managed to remove over 90 per cent of the tumour, including all the areas suspicious of aggressive activity, while retaining full function in her left hand.”

“The violin is my passion,” she said. “I’ve been playing since I was 10 years old.

“The thought of losing my ability to play was heartbreaking but, being a musician himself, Professor Ashkan understood my concerns.

“He and the team at King’s went out of their way to plan the operation – from mapping my brain to planning the position I needed to be in to play.

“Thanks to them I’m hoping to be back with my orchestra very soon.”