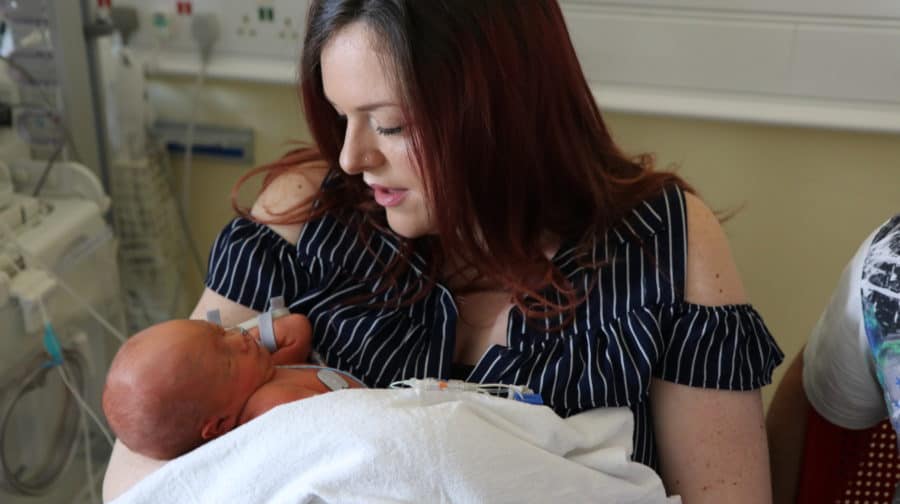 The first ever babies in the UK to receive keyhole surgery in the womb for spina bifida have been operated on at King’s College Hospital – including a baby whose mother’s life had been saved at the same hospital nearly thirty years ago.

Babies with spina bifida are left with a hole in the back and their spinal cord exposed after the spine does not develop properly during pregnancy.

The condition damages their spinal cord and can cause weakness or total paralysis, as well as urine and bowel problems, and can also develop brain damage from excess fluid on the brain.

Until now, surgical options for treating babies with spina bifida had involved either waiting for surgery until after birth, or invasive surgery while pregnant involving opening the abdomen and uterus, and then repairing the baby’s damaged spine.

The new specialist keyhole surgery, called fetoscopic surgery involves a team of medics using ultrasound, a series of tiny incisions and a long camera to push the cord back into the spinal canal before patching it up to prevent leaking, all without having to open up the abdomen.

She found out her baby had spina bifida following her 20-week scan at another hospital.

Before she was born, Sherrie developed severe anaemia and received life-saving blood transfusions through her mother’s abdomen at King’s College Hospital.

Having had first-hand of the expertise at King’s, Sherrie referred herself to the foetal medicine department where she was offered the fetoscopic repair.

The same doctor who helped her mother now leads the department that performed surgery on Jaxson – Professor Kypros Nicolaides, a world-rewnowned expert in the field of foetal surgery.

Sherrie said, “When we found out Jaxson had spina bifida I was given a number of options.

“We knew we wanted to keep our baby and I’m here today thanks to the specialists at King’s so I wanted my baby to have the same chance.

“The procedure took over three hours and the specialists were happy with how it went.

“We’re thrilled with our beautiful boy and even though he arrived earlier than expected he’s doing well and his back is healing nicely.”

Bassel Zebian, consultant neurosurgeon at King’s College Hospital, who led the neurosurgical part of the team carrying out the procedure said: “A number of centres around the world have made great strides in open foetal repair over the last few years and demonstrated the benefit of foetal surgery in reducing the severity of the condition and associated complications.

“The aim of the fetoscopic approach is to reduce the risks to the mother and future pregnancies whilst still ensuring maximal benefit for the baby.”

Dr Marta Santorum-Perez, consultant in foetal medicine, who led the foetal medicine part of the team added: “Only a handful of centres around the world have the required expertise to perform surgery using a fetoscope.

“We were fortunate enough to train and work closely with Dr Denise Lapa Pedreira, consultant in foetal medicine at the Albert Einstein Hospital in Sao Paolo, who pioneered this technique.”