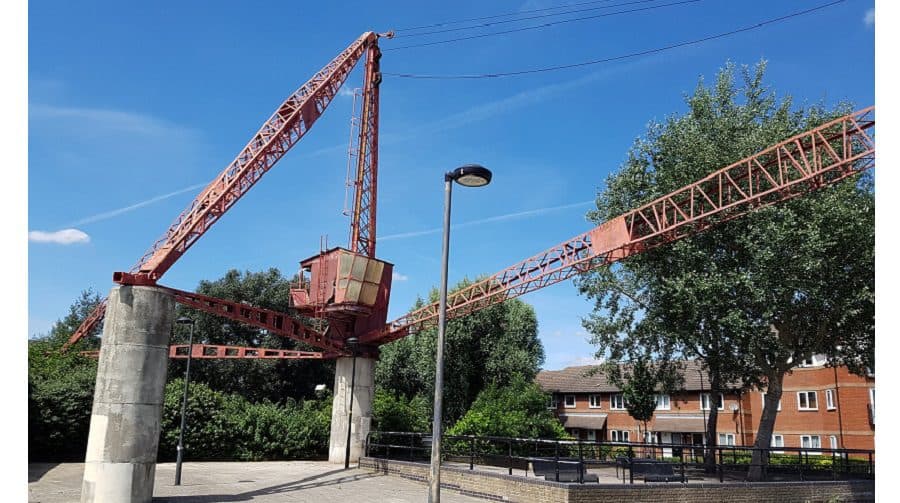 Rotherhithe’s historic red crane will begin to be dismantled this week to make way for flats, Becky Morton writes…

The development by Hollybrook Homes will provide 74 homes, including nineteen affordable, and will see the Scotch Derrick crane on Odessa Street  recycled as a sculpture by Surrey Docks Farm’s blacksmith Kevin Boys.

More than 360 signatures were gathered on a petition set up by residents to save the crane last year.

The crane was originally protected by a covenant with the Greater London Authority by The London Docklands Development Corporation in 1998 but it lost this safeguard in January 2014 under the direction of former London Mayor, Boris Johnson.

The crane is the last of its kind on London’s riverside and is a relic from Rotherhithe’s shipping past.

Mr Boys said: “I thought it was a great shame they were going to get rid of the crane as it is part of the area’s history. So I contacted the developers to see if they would be interested in having a sculpture made from it.

“Apart from keeping the crane itself it seemed like the next best thing. It would have been great to get it restored but it would have cost a lot. Hopefully we have found a compromise which will keep some presence of the crane on the site.”

The sculpture will be around 4-5 metres in height and constructed using steel from the crane.

Justin Elcombe, managing director of Hollybrook Homes, said: “Unfortunately over many years the condition of the crane has deteriorated to the point it is a health and safety hazard.  We are therefore proposing that the crane be dismantled and some of the material recycled to create a new public sculpture.”

In addition to providing 74 new homes, the development will remove a derelict nightclub and provide a missing section of the Thames River Path and a new café and restaurant. The scheme will also provide financial support to improve the visitor centre at nearby Surrey Docks Far and training apprenticeships for local people.

Work is expected to begin in the next month and is due to be completed within 24 months.