Definitely one to see now that London is open for business 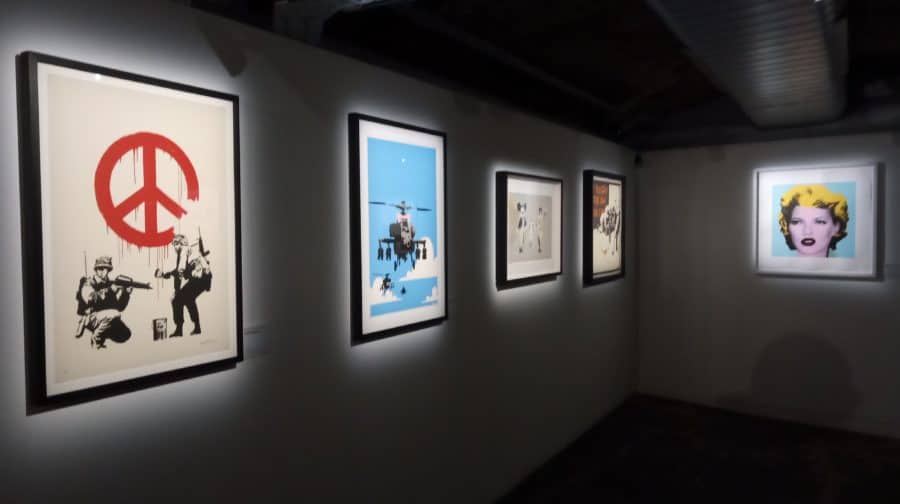 For me, the best thing about The Art of Banksy is that the exhibition is not authorised by Banksy, but is a show of over 100 artworks loaned from private collectors, writes Michael Holland…

Banksy has spent the best part of his 30-year career misappropriating walls, Paris Hilton CDs, and even band names, so an exhibition of his work put on by others should not bother him. Although, I think the exorbitant admission fee would rankle his anti-capitalist beliefs.

It is hard to believe that Banksy has been part of our cultural landscape for 30 years. His work is still so modern and relevant it always feels like he is a young upstart breaking through by smashing down what went before. This exhibition confirms that Banksy has been at the top of his game from the very start. It is the game Banksy created and his many copyists have never matched his hard-hitting wit.

The Art of Banksy leads us through a chronological warren of work in the dungeon-esque cellars beneath Seven Dials. We see that he was anti-lots-of-things from the beginning, and as his star and fame ascended he didn’t mind putting his hand in his pocket to help the less fortunate fight their battles, enabling Banksy vicariously to fight his. 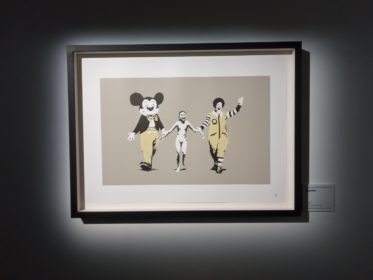 All the classics are included in the show, plus Brace Yourself, the large canvas he gifted to the band Exit Through The Gift Shop when he wanted to buy their name from them to use as the title for his 2010 film. It is rarely seen in exhibitions.

Choose Your Weapon is on display. The original large stencil first appeared on a Bermondsey wall in 2010 before being carefully taken off and allegedly sold for a large sum of money. (https://www.southwarknews.co.uk/news/7669-2/)

The proceeds from 2011’s Tesco Petrol Bomb all went to the legal fees of those arrested for planning to blow up a Tesco Express, while Save or Delete Jungle Book (2001), his image of the Jungle Book characters blindfolded in preparation for the woodcutter’s axe that he created for a Greenpeace campaign, can also be seen here. And the work on Paris Hilton’s CD is hilarious.

As well as the art a few of Banksy’s wise words are displayed, many validating his abhorrence of the world he inhabits. At the exhibition’s end is a sign pointing to a door that says: ‘Exit Through Gift Shop’. It leads to a narrow staircase with a metal door at the top, and on the other side you find yourself in a back alley. Brilliant.

Notoriously anonymous, Banksy is known the world over. He takes the art world’s millions while mocking that world, though I would guess that he lets that money filter down to those in need. Alas, no money from The Art of Banksy exhibition will filter down but it is definitely one to see now that the art and culture side of London is open for business.