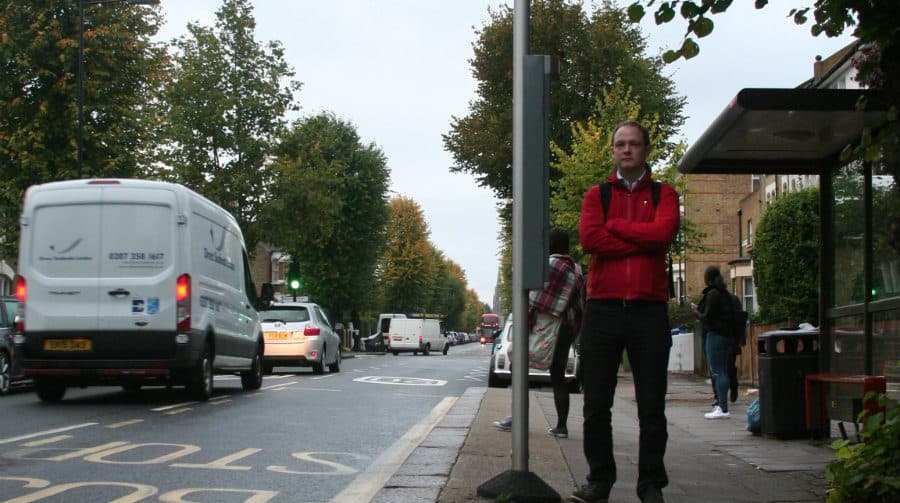 Matt Sheffield at his bus stop in Barry Road

A desperate dad has used an app to catch buses going at nearly twice the speed limit down his road.

Matt Sheffield said getting his baby out of the car and across the road to his house in Barry Road is an “absolute nightmare” as buses bomb it down the straight run.

“It’s like a racetrack down here,” said the 36-year-old accountant, who has taken matters into his own hands.

Using an app on his phone for measuring cycling speeds, Matt tracked how fast buses were going on his way to and from work. Over a two-week period he clocked speeds of up to 38mph, nearly twice the legal limit for the borough of 20mph.

Speaking to the News, Matt said the situation gets worse at night when the buses make fewer stops for passengers. “They come thrashing past my house way in excess of the speeds I have documented,” he said.

Matt has now enlisted the help of the neighbourhood policing team, who have agreed to train six willing volunteers with a speed gun to target racing roadsters, but hopes TfL will act beforehand to slow down their drivers. “If anyone should be sticking to the speed limit it’s the people that manage the roads,” said Matt.

Lib Dem councillor for East Dulwich ward, James Barber, is calling for TfL to introduce buses which are unable to break the speed limit. “It’s even more imperative that people driving eight tonnes of bus stick to the rules of the road and that includes speed limits. I’ve heard TfL are looking to introduce some buses unable to break speed limits. Perhaps having one of these buses would be a suitable punishment for any speeding bus drivers,” he said.

Mike Weston, TfL’s Director of Buses, thanked the News for bringing the issue to his attention. “The safety of all road users is very important to us and I have asked our operators, Arriva and Go-ahead, to look into this matter,” he said.

what is the app called ?