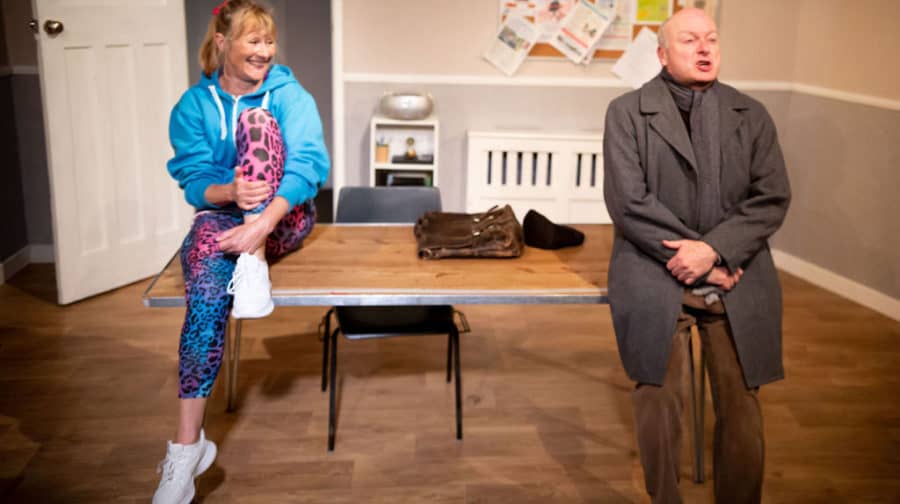 It was so good to be back in Brockley Jack Studio, one of my favourite theatres, and Kate Bannister, the Artistic Director there, was as pleased as we were that after 16 months it was reopening, so came onto the stage to thank us and everyone involved for this momentous event, writes Michael Holland.

Stewart Pringle’s Trestle is a winner of the Papatango New Writing Prize and deservedly so. Denise, who declares herself 63, facilitates a Zumba class at the local Temperance Hall. Harry, who declares himself a widower, has aspirations of high office but is merely the Chair of the Billingham Improvement Committee. Denise has an array of colourful dance wear, while Harry has a gavel that he bought for £5.49 on eBay in case he needed to restore order. As yet it has never been banged.

Each week he clears away the chairs and trestle table after the committee meeting for the Zumba class that follows. And in that limbo between the meeting and the dance class Harry and Denise make polite conversation. Initially it is about the hall rules and who does what in regards of the clearing up and setting up, but over the weeks their talk turns to local gossip. Before long Harry is staying later to chat for longer, and Denise comes earlier so she can help fold away the trestle table, and soon they are bringing sandwiches in so they can share food. All was going swimmingly as they learnt a little about each other each week. Denise spoke of her book club and Captain Corelli’s Mandolin: ‘There was a good blue bit in the film but they cut it out of the book,’ she says to his astonishment. 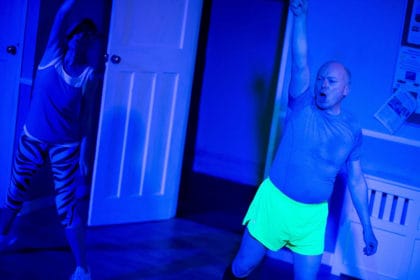 At this point the wannabe councillor was tempted into joining the Zumba class, which was one of the many high points in Trestle: ‘Took me a week to get me walk back,’ he wheezes as he limps in.

Next, they try to guess each other’s sandwiches just by smell alone. Harry, innocently taking it a step further, blindfolds Denise with his scarf for a blind-tasting. This creates hilarity for Denise before he realises his little game had other connotations.

Harry, it seems, would return home and think of banging his gavel and Denise doing Zumba when he mistook her flighty personality for flirty. Eventually, sadly, Harry crosses the line and an awkward situation ensues, which takes some time to correct over the following weeks.

But right itself it does and Harry even gets Denise to attend a committee meeting so she can see what he actually does. She hates it. She sees the rampant NIMBYism and tells him as much. Once again their friendship is on the slide and once again we wonder if it can be restored.

Trestle is beautifully written, and wonderfully performed by Jilly Bond and Timothy Harker under the direction of Matthew Parker. Trestle is hints of Alan Bennett and Alan Ayckbourn wrestling with Peter Kay. Trestle is to be seen.

Southwark NewsNewsWrestle With The Trestle