First exhibition in a professional gallery for youngsters 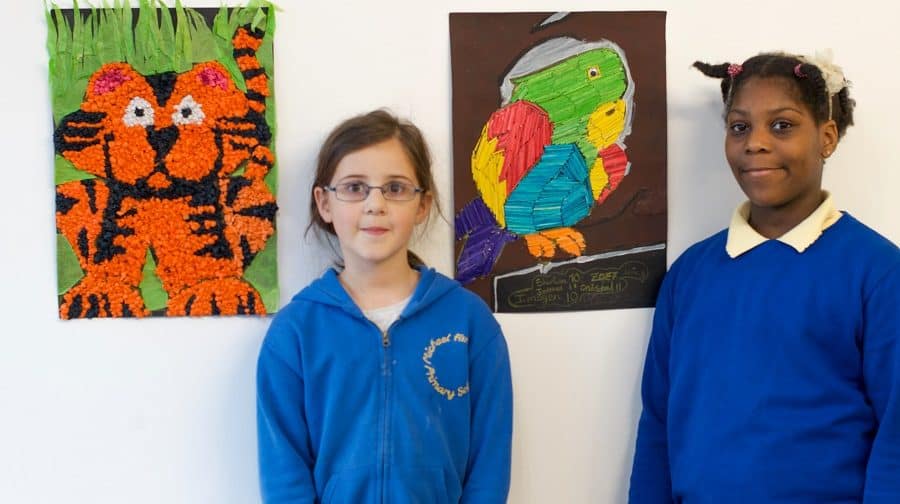 Two 'Art Stars' with their handiwork The young artists created their own ‘Art Zoo’

The youngsters created their Art Zoo during the course of four weeks of workshops at the Play Shelter After School Club at Walworth’s Michael Faraday School and a special workshop at the ASC gallery, which displayed their work throughout April and early May.

Among their creations were giant papier-mache snakes, a shoal of hanging fish and sharks, wall-mounted herds of sheep and flocks of tropical birds.

Nathaniel, aged eight, who made a rabbit mask, a fish and a paper tissue tiger, said his favourite thing about the project was “making your own creations by using your imagination.”

Zoe, who made a fish, a hand-drawn sheep and a matchstick parrot, said seeing her work in an exhibition was “exciting, because then I’ll be famous”, while Haydn, aged six, said the best bit was “when my mum came and saw my art”.

Art Stars gives hands-on art-making sessions to young people under the age of ten with the help of professional artists and galleries, aiming to make sure children from different backgrounds and at all ability levels can benefit.

Founder Peter Wells-Thorpe told the News: “Art matters. It’s a way for young people to express who they are, make work they can be proud of and grow in confidence and self-belief.

“There is no right or wrong way to create art from the materials we give you.

“Children are encouraged to work in teams or on their own, to use their imagination to experiment and make a piece of art that reflects their personality.” The artists are now preparing for their next exhibition in June

Dean Parker, who led the Play Shelter workshops, said: “I invited the children to decide which zoo animals they would like to make, then chose different materials for each animal.

“We used matchsticks, tissue paper, cotton wool, felt, paints and pastel crayons. All the children involved were very enthusiastic about making artworks for the gallery and are eagerly looking forward to the next project, as am I!”

All the children received their Art Stars certificate and are now preparing for London’s first ever Hama Beads exhibition at the ASC Gallery in June.

The initiative, which is run by the international art consultancy 3003 Group, said it was keen to hear from any schools keen to hold their own ART STARS exhibition. It's a Jolly Conley Christmas