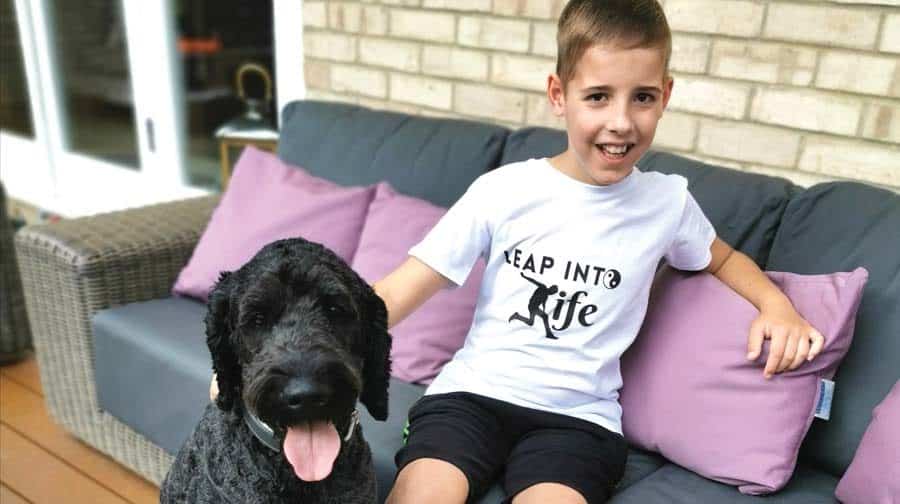 Kasten wearing one of his T-shirts

A young boy who was in Evelina London Children’s Hospital for six weeks with a rare condition that left him unable to speak, eat or walk is raising money for the doctors and nurses who “saved his life”, writes Kit Heren…

Kasten Grol, from Sevenoaks in Kent, was rushed to hospital in 2018 after having a seizure. His condition worsened and doctors diagnosed him with autoimmune encephalitis after he had 50 more seizures in his first four days in the children’s hospital.

“Kasten was like a completely different little boy,” his mother Francisca said. “He began to lose his speech and slowly lost the ability to do anything, until finally he couldn’t even swallow. He would just lie there, staring off into the distance.”

After trying several different treatments, hospital staff hit on plasmapheresis – removing liquid plasma from Kasten’s blood, cleaning it and returning it to his body. Kasten slowly began to get better. 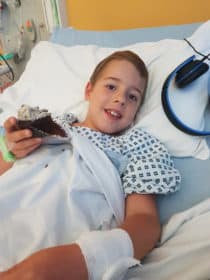 Francisca added: “Before the treatment we began to fear the worst, but after it he began to walk and talk and has been slowly recovering since. It has been a long and sometimes difficult journey but he is doing so much better and is now back at school and doing really well.

“There are no words to describe how grateful we are to the team at Evelina London who cared for Kasten and still do to this day. They saved his life.

“Kasten adored his nurses. At Evelina London you get a multi-layered approach, you get the love, care and expertise of the nurses, as well as the professionalism and specialist knowledge of the doctors and clinicians.

“The fact they were able to diagnose his condition and treat him within a matter of days has significantly reduced the likelihood of him relapsing later in life.” 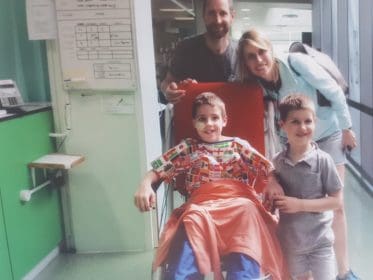 Kasten with his family

In early 2021, Kasten, 9, started asking his family about ways that he might be able to help raise some money for Evelina London as the country went into lockdown for a third time.

Francisca said: “Kasten has always thrown himself into different opportunities and is incredibly enthusiastic. He always has been and thankfully didn’t lose this through his illness and was determined to do something to show his support for Evelina London.”

Kasten added: “I’d seen lots of adults raising money but I thought it was time for kids to do it too. I saw a TV show about a boy who started his own business and that’s when I had the idea of doing the same and how Leap Into Life started.”

He soon came up with the idea of Leap Into Life, a t-shirt brand that spreads a positive message. 50 per cent of the profits will go to Evelina London.

Kasten said: “The logo means “luck” to me. It is me leaping back into my life after the doctors and nurses and everyone at Evelina London saved my life. They save so many other people and they mean so much to me.”

The new business was a success: Kasten soon sold out of his first batch of t-shirts, and has already made more.

“I already have other plans for Leap Into Life,” he added . “I’d like to make a hat or maybe a wristband.”

Dr Ming Lim, paediatric neurology consultant at Evelina London, said: “It’s fantastic to see how well Kasten is recovering and we’re so thankful he’s decided to raise money for Evelina London. Leap Into Life is an extremely apt name for Kasten’s t-shirt brand. He is an energetic and determined boy who hasn’t let his illness hold him back.

“I’ve no doubt that Kasten is doing as well as he is thanks to his loving family, who have encouraged and supported him throughout.

“We wish Kasten the best of luck with his fundraising and can’t wait to see what he designs next.”

To buy a Leap Into Life t-shirt, visit: www.leapintolife.co.uk