This story will be updated as new information is received 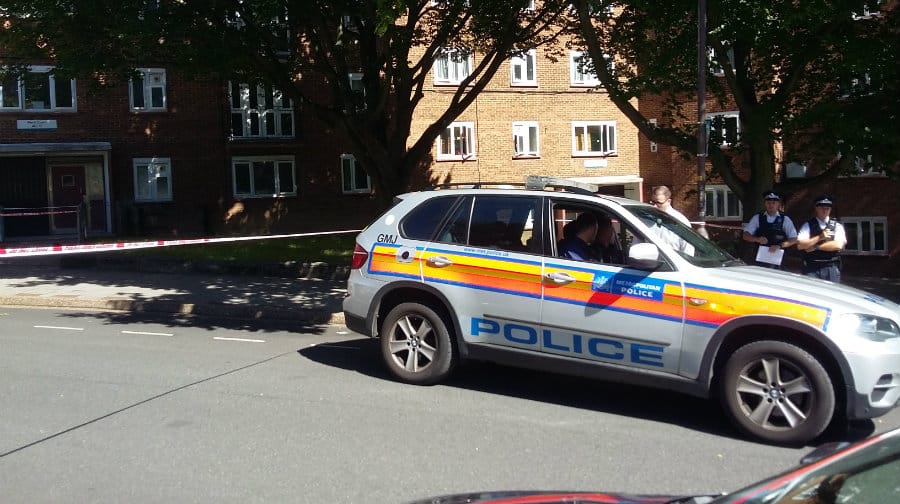 Police cordon off the site where a young man was shot in Basingdon Way, Denmark Hil

A young man has been hit in a drive-by shooting in an estate near Denmark Hill.

Police and an air ambulance were scrambled to the Perth Court estate in Basingdon Way at about 1.30pm.

Residents have spoken with fear and shock after hearing the gun shots and watching officers tape off their neighbourhood.

It is believed that the victim was a man in his twenties, who was struck in his backside by at least one of several bullets.

One man who did not want to be named said: “I know the kid who got hit. He was shot in the arse in a drive by.

“I think it was gang-related. I don’t live in this street but I know nothing like that ever happens around here. It’s a nice neighbourhood.”

Sat in a play area just opposite the block of flats where police were guarding the street, a mother and her daughter spoke to the News and retold the moment the gun shots rang.

“I knew straight away,” the teenaged daughter said. “It doesn’t sound like fireworks. It made a really loud echoing sound because the bullets hit the door behind him.”

The mother said: “I had just left my house to go to the shop when it happened.

“Literally two minutes before the gun shots I walked out my door and then my kids rang and said there had been a shooting.

“I can’t believe this would happen in my street. It could have been my boy who walked out that door when they drove past. You warn your kids about people carrying knives, but you never expect it to be guns.”

Another man who was parking his car at the entrance to the estate at 1.40pm said he witness the air ambulance trying to land at the green by the play area.

“The ground is too uneven so they had to lift off and land elsewhere before they took him,” the man said.

The victim is believed to be in a stable condition at King’s College Hospital after the shooting.

Police confirmed they were called by the London Ambulance service at about 1.38pm.

Arrests have not yet been made, although officers from the Trident and Area Crime Command have taken over the investigation.

Anyone with information that could help the police with their investigation should call 101.

What an awful event! Earlier during the day my wife and I were just down the block pushing our son in his wheel chair. When we saw the amount of police in the area we decided it was best to swiftly head back home. We faced an attempted burglary this year while our son was in the hospital recovering from his most recent brain surgery. In the last several years our upstairs neighbour has been burglarized, next door neighbour and there have been several other burglaries we know of. Not that long ago we captured someone in our front garden at 1:00 am on one of our CCTV cameras. Our next door neighbour not that long ago had someone in her front garden looking around in the dark for something using a torch. When the person left she went outside and found a knife that she reported to the police. We have noticed an increase in police patrolling our neighbourhood in the past several months, it is greatly appreciated.