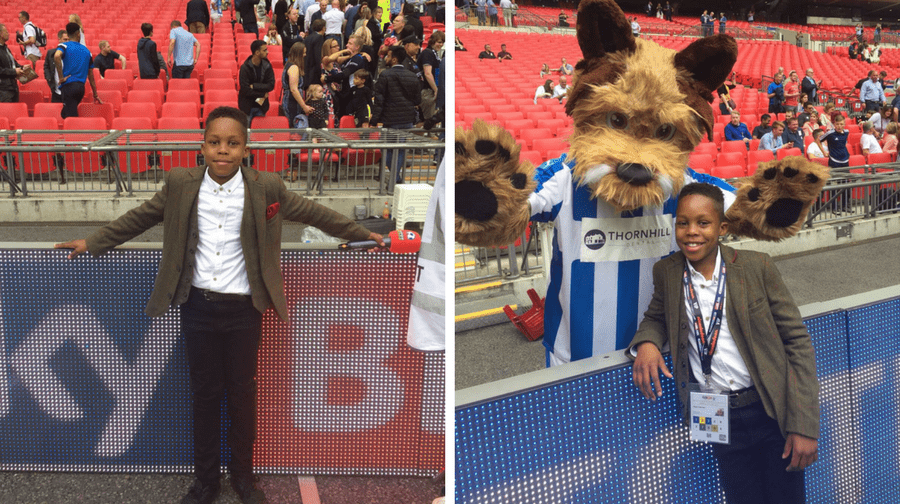 A confident young Millwall fan says he “wasn’t nervous one bit” when commentating this season’s Championship play-off final at Wembley.

Akai Coleman had the chance to commentate on the entire Huddersfield v Reading match at Wembley on Monday, May 29, after winning a competition.

The twelve-year-old revelled in the opportunity to interview the Huddersfield Town players after they won on penalties – and even sprayed the team with Champagne.

“I got to interview Huddersfield defender Tareiq Holmes-Dennis – he’s my cousin – and a German player,” said Akai, who lives in Rotherhithe.

“I got to throw Champagne over them. It was amazing and I wasn’t nervous one bit.”

Akai beat 117 other entrants in a competition run by Nickelodeon as part of their weekly English Football League programme, Nick Kicks, on Nicktoons.

He said he would love to commentate on a match again and hoped there would be more opportunities in the future.

“I want to thank all the Nickelodeon team and all the people who voted for me and for giving me the experience,” he said.

“It was absolutely amazing,” Akai’s mum, Adede, added. “The atmosphere was out of this world.

“He was just in his element and he was professional and just enjoyed every bit of it.”