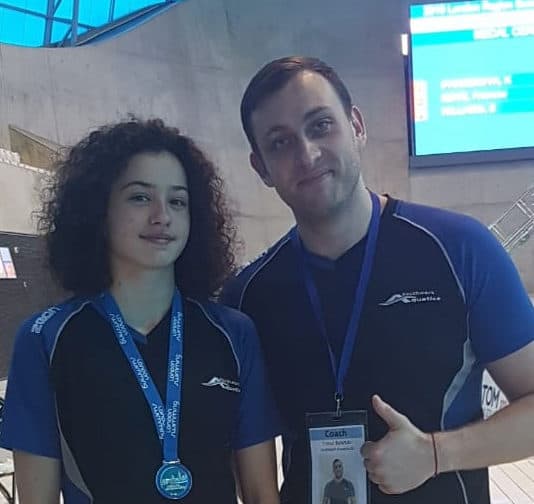 Fifteen-year-old athlete Teddy Kinsler is hoping to raise £750 for a coach to support her national swimming career as she prepares to complete in two championships, writes Hillary Chaisson…

A true Southwark success story, she learned to swim at the Seven Island pool, now she trains there several times a week with Southwark Aquatics.

Local girl, Teddy Kinsler, has qualified in the 50m breaststroke for the British Summer Championships at the end of July.

This is an amazing accomplishment considering only the top 24 swimmers in each age group and discipline are invited to race.

If this wasn’t enough, Teddy will also be representing  Southwark in the English Summer Championships, competing in the 200m breaststroke among 20 other English swimmers in her age group.

The next step to help Teddy on her journey is for the club to raise £750 to send a coach to support Teddy on the national stage.

The races take place in Glasgow and Sheffield, and a team coach is required to attend briefings the eve of both competitions, as well as during race days.

Southwark Aquatics, a not-for-profit organisation, is hoping to crowdfund the costs.

You can donate at gofundme.com/go-teddy.