150 not out: Dulwich Cricket celebrate anniversary in style at Lords 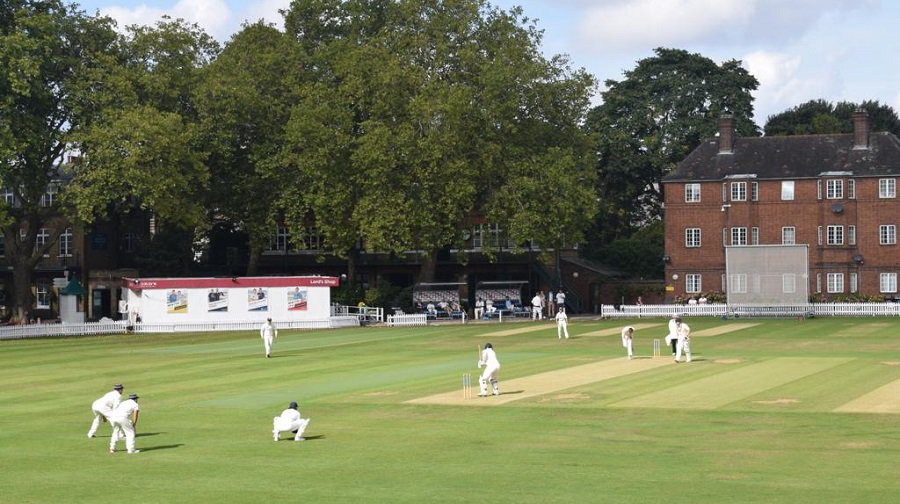 FRESH FROM winning four of their last five league games, Dulwich travelled to the Mecca of cricket to play the Cross Arrows on the nursery ground at Lord’s last weekend.

Dulwich faced a daunting total of 313, but a remarkable unbeaten partnership of 87 for the last wicket saw them secure a famous victory by one wicket off the penultimate ball.

The home side had first use of a good batting pitch with a short boundary on one side. The openers had put 50 on the board in nine overs against Jon Lodwick and Kamran Munawar when skipper James Overy fell to a good running catch on the boundary by Patrick George. George soon joined the attack and he and Sunil Isaac put a brake on the scoring, with George taking 2-19 off seven overs and Isaac 1-30 off eight to reduce Cross Arrows to 137-4 after 27.3 overs.

George gave way to fourteen-year-old leg-spinner Ahmed Khan who produced a mixture of loose and challenging deliveries, and was unlucky not to take a wicket.

Salaar Waqar came on at the other end and struck in his first over when Kira Chathli held on to a blinder at mid-off, her second catch of the innings.

Three more wickets for Waqar saw the score decline to 228-8 in the 42nd over. But this brought in left-hander Clint McCabe, who peppered the short-leg side boundary. He was particularly severe on George, who came back at the wrong end to concede 39 off two overs. McCabe fell to Sam Ellison in the 49th over with the score on 304, having made 59 off just 30 balls. The last pair lifted the score to 313-9, with number four bat Phil Wise remaining unbeaten with 87, having faced 100 balls. Waqar, with 4-44, was the most successful bowler.

Khan then opened the batting with Matt Balch, and made the early running before falling to Luke Sharp for 24 with the score on 42 in the eleventh over.

Skipper Ed Stolle was lbw in Sharp’s next over. Tight bowling kept Balch and Chathli down to 24 runs in eight overs before Chathli was bowled for ten.

At 72-3 after 21 overs Dulwich were well behind the rate, but Waqar changed that with a commanding innings of 69 off just 35 balls. He added exactly 100 for the fourth wicket with Balch in 11.4 overs before being caught on the boundary off McCabe. Balch fell one run later, having held the innings together with a patient 54 off 99 balls.

Ellison, who had earlier retired with blurred vision after just one ball, recovered to smash 37 off 20 balls in a stand of 46 in five overs for the sixth wicket with Assan Crawford-Khan. Ellison’s dismissal to McCabe in the 39th over was followed by the run out of Crawford-Khan in the 40th and the wickets of both Munawar and George to McCabe in the 41st.

Dulwich had lost four wickets for eight runs as they declined to 227-9 after 41 overs.

With 87 runs needed off nine overs the match seemed as good as over. But Lodwick, who had amassed just four singles at this point, now treated McCabe with due respect while launching an assault at the other end, taking full advantage of the short-off side boundary. He was given vital support by Isaac, who gave him the strike when he could and defended resolutely when he had to. Sharp, who had taken 2-26 in his first seven overs, was recalled to try and finish it off but was hit for 35 in three overs.

Dominic Evans conceded fifteen off the 48th to leave 20 required off the last two. But McCabe gave away just four runs off the 49th to leave sixteen needed off Evans in the final over.

Isaac took a single off the first ball, Lodwick hit the next two for six, and followed up with a two and a single to reach the target with one ball to spare. He had scored 78 out of the last wicket stand of 87, and finished with 82 not out off just 40 balls, with six fours and seven sixes.

This remarkable victory capped a magical day. The match was originally scheduled for last season as part of the club’s 150th anniversary celebrations, but was scuppered by the weather.

Dulwich were grateful to their hosts for rearranging it for this season. It will have left a lasting memory for the players and officials, and the increasingly vociferous supporters who came along to watch it.

Does anyone know if HONOR OAK CRICKET CLUB STILL EXISTS PLAYED THEIR AS A YOUNGSTER IN THE SIXTIES. MY OLD SCHOOLMASTER KEN MATON WAS A MEMBER.

Southwark NewsSport150 not out: Dulwich Cricket celebrate anniversary in style at Lords