Dulwich Hamlet boss: ‘There is a lot more to come from us’

Hamlet have won three league games on the bounce 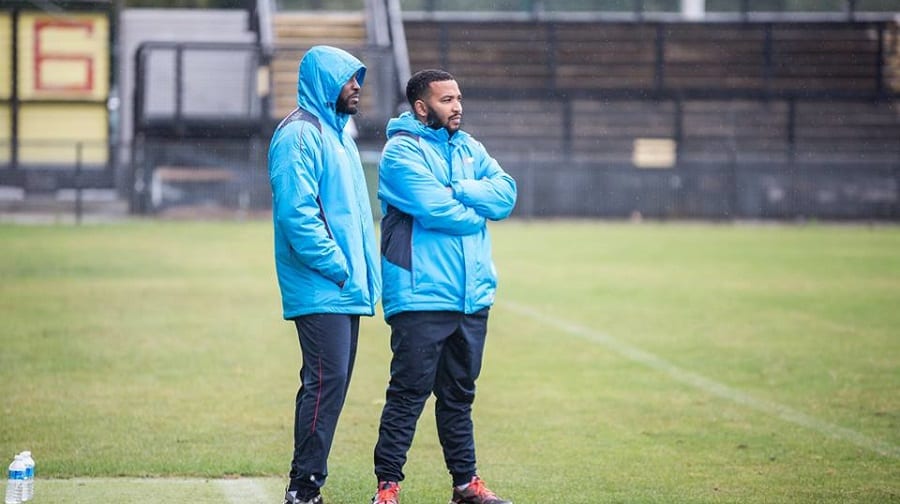 A CHANGE in formation was key to Dulwich Hamlet coming from 1-0 down at half-time to secure a precious 2-1 victory at struggling Hungerford Town in the National League South last Saturday.

Hamlet’s third win on the bounce in the league, which sees manager Gavin Rose’s team in sixteenth in the table with seventeen points, came courtesy of two late headed goals from corners.

Hamlet are now eleven points clear of the relegation zone.

“At the point of us scoring our goal we actually changed our shape a little bit,” Rose told the News. “We changed from a quite narrow midfield diamond to a formation more similar to traditional a 4-4-2, with two up front, Anthony Cook on the right and Dominic Vose playing as an inside playmaker coming in from the left.”

It was left-back Nathan Green and Vose’s impressive interplay down the left flank that was to reward Hamlet with a number of corners. With Hungerford having conceded both goals in their 2-0 away defeat to Slough Town from corners, Rose admitted that set-pieces were an area the team had targeted before the game.

“We were quite aggressive at that point,” Rose said. “We were aware that they had conceded quite a few goals from set-pieces. We were aware of our physicality in the box giving us an advantage over Hungerford and the balls in from Ashley Carew were excellent, on the money, so they allowed us to capitalise to full effect.”

The late turnaround, with goals from Green and Kingsley Eshun after Danilo Orsi-Dadamo’s opener, came after a sub-par first half performance from Rose’s men. Rose noted that the team had not played well in the opening 45 minutes, but nevertheless praised his team’s effort just 48 hours after Hamlet played Crystal Place on Thursday night.

Rose continued: “The first half was scrappy. The goal we gave away was quite poor – they came from mistakes that should not have been made. It was not an ideal performance and then we gave a goal away which was disappointing.

“In the second half we showed a much more industry, worked a lot harder, showed intelligence in moving the ball up the pitch and provided a threat from set pieces. I thought considering the match on Thursday that the performance was tremendous.”

Nyren Clunis limped off injured in the first half, with Rose providing an injury update after the match. “Nyren came off with an injury, he had a hyper-extension of the knee. He’s had it for two weeks. We’re not sure how bad it is but we thought it best to take a precautionary measure and then reassess after performing a medical scan on Tuesday.”

If Hamlet’s victory was a hard-fought one against a well-organised Hungerford team, Rose expects to see more from him side in the coming weeks.

He said: “We haven’t seen the best of our group – there is a lot more to come from these lads both individually and collectively. We’ve won three games consecutively in this league but we will improve even more.”

Southwark NewsSportDulwich Hamlet boss: ‘There is a lot more to come from us’