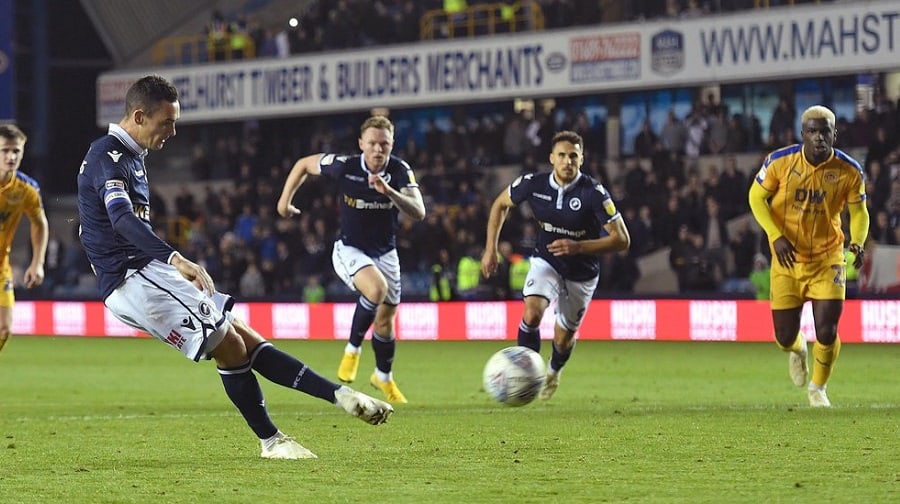 SHAUN WILLIAMS appears to be Millwall’s new penalty king – with Lions boss Neil Harris more than hinting he was involved in the decision to relieve Lee Gregory of the duty.

Gregory had been the Lions’ first-choice spot-kick man, but it was Williams who took responsibility against Wigan Athletic on Tuesday night and fired high into the top corner from twelve yards in front of the Cold Blow Lane to level the game at 1-1.

That set the home side on their way towards claiming a third league win of the season, sealed through Steve Morison’s 82nd-minute strike.

Gregory has missed seven penalties in his Millwall career, most infamously failing twice from the spot in injury-time in a League One game against Oldham in February 2017 that ended 0-0.

Gregory was unsuccessful with two spot-kick last season, the second on the last day against Aston Villa when Williams had earlier scored from twelve yards in the 1-0 win.

Williams put away a penalty earlier this season in a 3-2 EFL Cup win over Plymouth.

“Lee has missed a couple, and Shaun has scored a couple,” Harris said. “Lee doesn’t want to not take penalties, he wants to take them.

“When Shaun is not on the pitch and Lee takes it, I’ve got every faith in Lee as well.”