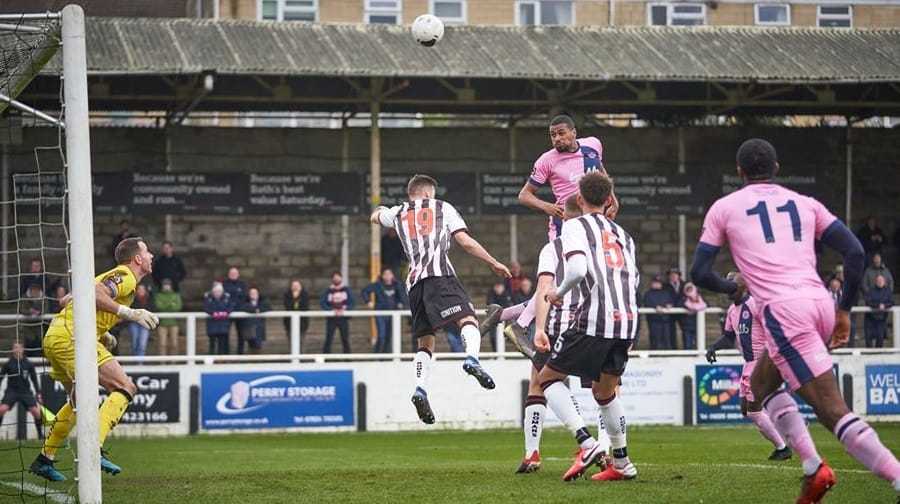 Dulwich Hamlet lost 3-2 at Bath City last weekend to drop to within two points of the relegation places in National League South.

The Hamlet fought their way back into the contest as they twice levelled at Twerton Park through Shamir Mullings and Danny Mills with eleven minutes left, but Tom Smith completed his hat-trick in the 85th minute to give second-placed Bath the points.

Gavin Rose’s side had their chances to get something from the game. They were first to register an effort on goal as Dominic Vose forced goalkeeper Ryan Clarke into a save.

Mullings then shot wide and Mills headed over from Jack Connors’ throw-in.

But despite that positive start, Dulwich found themselves behind in the fourteenth minute as Smith took advantage to sweep in the loose ball past Charlie Grainger after Jesse Debrah had challenged Sam Pearson.

The Hamlet had their own long-throw specialist in Marvin McCoy, and they almost equalised through that route as Clarke failed to collect the ball and with Mullings and Mills closing in Bath just managed to scramble the ball off the line.

Clarke denied Vose again but six minutes before half-time it was 1-1 as Jeffrey Monakana crossed from the right and Mullings lashed the ball high into the net.

That lead however lasted less than two minutes with Dan Martin crossing from the right and Smith arriving at the far post to claim his second.

Mills almost forced the ball past Clarke at the far post in the 50th minute before Smith and Joe Raynes went close to extending the hosts’ lead only to be denied by Grainger.

The visitors missed an excellent chance to make it 2-2 with 22 minutes left when another long throw-in from Connors was too much for Clarke to claim under pressure from Mills, but with an open goal in front of him Monakana scooped over from six yards.

Grainger saved Dan Bowry’s long-range effort and in the 79th minute Dulwich levelled for the second time when Mills headed in from Monakana’s corner.

But again the Hamlet’s lead didn’t last long and it was Smith who claimed the match ball with a spectacular strike past Grainger from 30 yards into the top corner.

Dulwich had the chance to equalise for the third time in the first minute of stoppage time after a move started by Dylan Kearney who found Lionel Ainsworth on the right. Ainsworth crossed first time for Mills but the striker couldn’t beat Clarke from a good position.

Dulwich have 34 points from 32 games and sit sixteenth in the table. There are just two points separating six teams, and with Hungerford Town cut seven points adrift at the bottom it’s a desperate scrap to avoid the second and last relegation place with fourteen games left.

Dulwich have a crucial fixture against 20th-placed Tonbridge Wells this Saturday. They can extend their advantage over their relegation rivals to five points with a win.

Kick-off is 3pm at Champion Hill.