Dulwich Hamlet are out of the FA Cup – but over £12,000 in prize-money this season provides much-needed boost 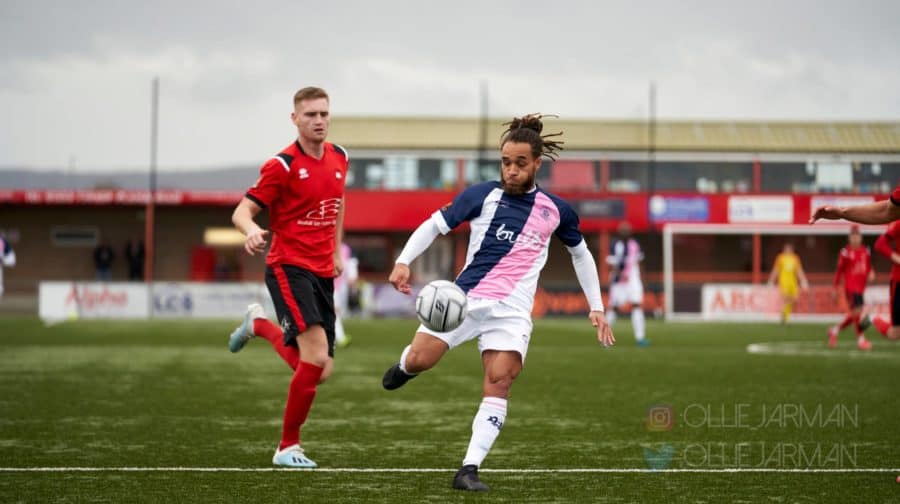 DULWICH HAMLET are out of the FA Cup after losing 1-0 at National League South rivals Eastbourne Borough in the fourth qualifying round last weekend.

James Hammond scored the only goal of the game in the 39th minute, ironically from the penalty spot after the Hamlet had progressed through the previous two rounds on penalties.

Gavin Rose’s side rarely looked like clawing back that deficit, and their chances weren’t helped when Kuagica David was sent off with 20 minutes left.

It is some consolation with match-day revenue still unavailable to them that Dulwich pocketed £3,125 as the losing side in the tie. Their FA Cup exploits this season have boosted their bank balance by a total of £12,125.

The visiting goalkeeper James Pardington was called into action in the thirteenth minute when he tipped over Charlie Walker’s header from Dean Cox’s cross.

Eastbourne are a hugely experienced side, with the likes of Cox and Chris Whelpdale who have over a combined 700 games in the Football League under their belts.

Jordan Higgs denied Whelpdale a chance when he cleared a cross as the hosts piled on the pressure.

Dulwich had their first chance in the 26th minute. Charles Clayden, who is on loan from Charlton, found Michael Timlin, but goalkeeper Franco Ravizzoli saved the former Southend midfielder’s volley. David headed over from the corner.

Chances were few and far between but Eastbourne were presented with the opportunity to go ahead six minutes before half-time.

It wasn’t clear-cut when Greg Luer hit the deck as debutant Mahlondo Martin cleared. But referee Jack Packman pointed to the spot and Hammond sent Pardington the wrong way.

Dulwich through Clayden again created a half-chance with a cross that Ravizzoli couldn’t deal with but there was no visiting player there to punish the goalkeeper.

It continued to be a scrappy game in difficult conditions as Dulwich struggled to build any kind of attacking momentum.

And in the 70th minute Rose’s side were reduced to ten men when David picked up a second yellow card.

A mix-up between former Millwall defender Jesse Debrah and Pardington gave Eastbourne the chance to double their lead but they couldn’t take it. Reise Allassani looked like he had given Dulwich a late chance when he appeared to be fouled on the edge of the box, but in keeping with a tough afternoon Packman didn’t give the free-kick.

Dulwich are back in league action this Saturday when they host Chelmsford City at Champion Hill. Kick-off is 3pm.

Fans can watch the game for free via the club’s YouTube channel, with commentary from DHFCTV’s Tom Bale.

Dulwich said: “The club has made the decision to steer clear of paywalled streams to allow as many Hamlet fans as possible around the world to watch the men’s teams progress during this unprecedented season.”

Southwark NewsSportDulwich Hamlet are out of the FA Cup – but over £12,000 in prize-money this season provides much-needed boost