All National League clubs have been playing without fans this season 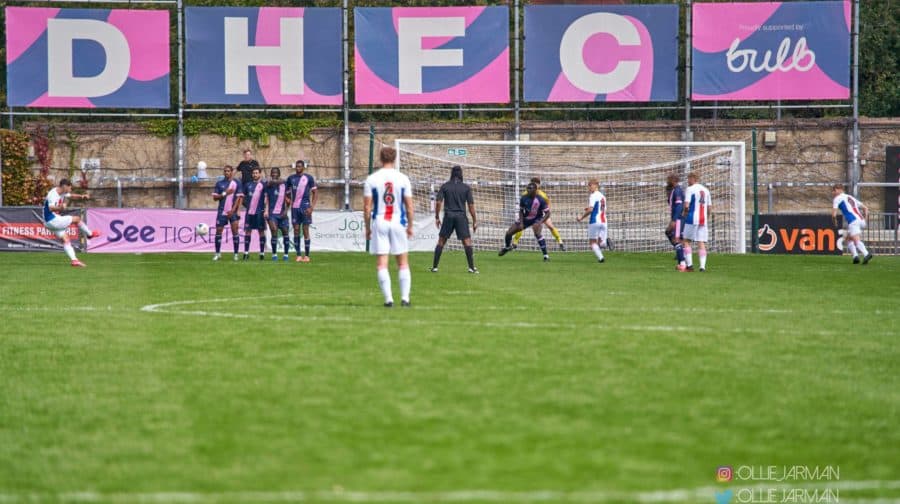 Dulwich Hamlet chairman Ben Clasper has revealed to Southwark News his frustrations about the distribution of the National League bailout package – which was supposed to be “focused on gate receipts”.

Five National League North and South clubs have received £36,000, with the rest getting £30,000 a month. But Clasper, along with some of the division’s other chairs, including Maidstone United co-owner Terry Casey, believes that the split is totally unfair, claiming some clubs are effectively receiving “free money”.

Speaking during the Hamlet’s 0-0 draw against Chelmsford City last Saturday, Clasper said the money should have been allocated “the way the government told everybody it would be split, which is that it would be absolutely focused on gate receipts. [That is], if you get 2,000 people, you should be getting more money than someone who gets 200 people. But, for some reason, they’ve decided not to honour the government instructions.

“The announcement for gate receipts was September 30. It was restated by the government on October 18, and we knew nothing about the change until it was just dropped on us last week.

“But then you’ve also got a problem where a lot of clubs are doing really, really well. Their argument is, ‘well not everyone is unhappy’. But just because you’ve handed free money to people, that doesn’t make it right.”

Part of the problem discussed by the Dulwich chairman is that other clubs have been less than cautious with their spending, under the assumption that they would be entitled to a greater chunk of the rescue package.

Clasper added: “Clubs have started to spend that money, and they shouldn’t have done. We were all written to, to say, be prudent, don’t go and spend it. But we’re seeing a lot of signings happening in some clubs.

“I’ve been one of the few that has been [happy with the way the National League has handled the crisis]. From March onwards, they’ve done pretty well having been given a really tough hand, and they were doing well up until this distribution.

“Actually securing the money was a great achievement. But then when you’re handed the rules [how] to divide it and you get it wrong, then you undo a lot of really good work.”

Dulwich Hamlet FC Women were taking on Dartford at Champion Hill on Sunday afternoon, in what the club’s Twitter account was billing “the last chance to get down to Champion Hill for at least a month”.

The second national lockdown, which is set to begin on Thursday, is the latest blow for Clasper, who has been delighted with attendances at the women’s matches this season.

Speaking hours before the government made its announcement, he said: “The women are allowed [fans] at the moment because they’re grassroots, not elite. But if the lockdown comes, I can’t imagine they’ll be allowing fans into grassroots games for the foreseeable future.

“It’s a huge problem, because we got 600 last time and we’ve already sold 400 for tomorrow’s game. So they’re getting double the attendances that they were getting last year. Switching that off again will be a disappointment.”

Clasper added: “We’ve never been campaigning for fans because we want to wait until it’s realistic and until we’re confident that it is safe. Clearly with the infection rate at the moment it isn’t.

“What we were campaigning for, though, was either not playing the games until we could, or funding. The announcement of funding was great. But then when you mess up the last bit of it, it’s not so great.”