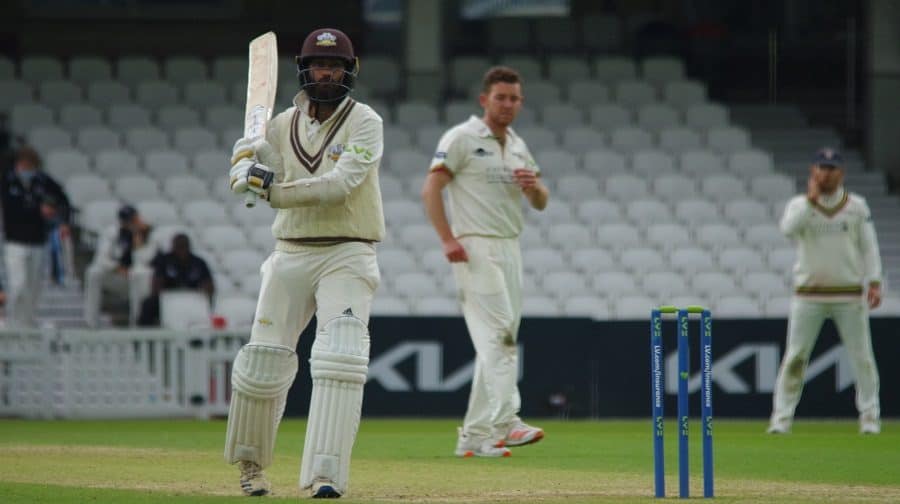 Amar Virdi finished with 4 for 96 as Surrey took 33.5 overs on day four to complete an emphatic innings and 47-run victory against Gloucestershire at the Kia Oval last weekend and propel themselves into LV= Insurance County Championship contention.

Gloucestershire, starting the final day still 191 runs adrift on 124 for 5 in their second innings, after being forced to follow on, were dismissed for 268 despite excellent resistance from Jonny Tattersall who remained unbeaten on 86 from 136 balls.

Miles Hammond added only seven runs to his overnight 38 before looking distraught to be given out caught at the wicket for 45, sweeping at Dan Moriarty, and the 25-year-old left-hander, who made 77 in the first innings, batted for almost six and a half hours and 280 balls in the game.

Off spinner Virdi had match figures of 7 for 142, while slow left-armer Moriarty added 2 for 82 to his first innings 6 for 60 – which was his fourth consecutive haul of five wickets or more in just his third first-class appearance.

Surrey’s 22-point win puts them third in Group 2, just six points behind Gloucestershire, who took only two bonus points from a first defeat of the championship season but who remain leaders of a fiercely-contested six-team conference with three games to play.

Those are an away fixture against Leicestershire followed by two home games at Cheltenham in July, against Middlesex and Hampshire, while Surrey are still to play Hampshire away and second-placed Somerset at home. The top two from each of the three groups will form Division One and those six counties will play for the championship title in August and September.

Hammond’s dismissal from the first ball of the sixth over of the day was quickly followed by the downfall of Tom Smith for 1, lbw to one from paceman Jamie Overton that kept low.

Both Matt Taylor (15) and David Payne (14) lofted Virdi to long on, after some defiant blows, while Tattersall swept and swung Moriarty for four and six and also drove Overton beautifully through mid off for another of his ten fours as he moved from his overnight 15 past a deserved half-century.

Last man Dan Worrall then helped Tattersall, who swept Will Jacks for another six, to add a merry 56 for the final wicket, hitting five fours in his 24 before being bowled by a good one from Moriarty.

“It was a fantastic performance by the whole team,” Virdi said. “And this is a key win for us because it was against the side top of the group and because it now gives us great momentum going into the start of the T20 Blast and then into our final two championship group games later on.

“It was a big toss for us to win at the start but then Hashim Amla led the way brilliantly by batting time on that pitch and also with his captaincy.

“It was great for me to bowl again in partnership with Dan [Moriarty] and, as bowlers, we complement each other and enjoy winning games for Surrey. We also kept things tight in their first innings, as well as taking wickets, and that was important in that we were able to enforce the follow on knowing that we would almost certainly not have to bat again on the final day.”

Gloucestershire captain Chris Dent added: “We showed a bit of fight today and the guys who batted out there today did a really good job. Surrey played the better cricket over the four days but we are still top of the group and there is a lot for us to play for.

“We have to learn and improve, and put those lessons into practice if we have another match on this type of pitch later in the season. For now we have to make sure we turn up with our heads held high on Thursday, when we start our next match against Leicestershire.”