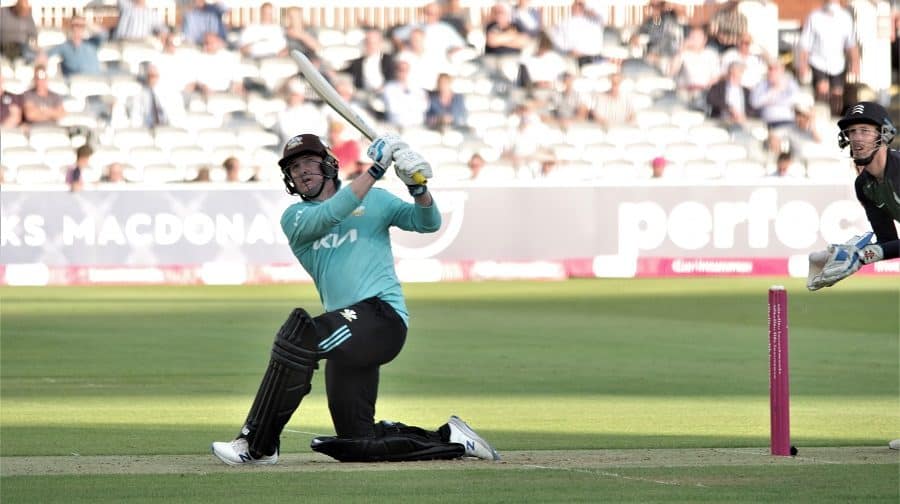 Jason Roy says Surrey are “extremely happy” after their flying start to the Vitality Blast continued with a five-wicket win against outgunned Glamorgan at the Kia Oval on Monday.

Roy smashed three sixes and eight fours in a 35-ball 64 as Surrey made it three consecutive wins.

Marnus Labuschagne earlier hit 74 from 51 balls and Nick Selman’s 28-ball 43 featured three sixes but Glamorgan’s 166 for 8 was never going to be enough once Roy had thrillingly assaulted the Welsh county’s spinners in the opening overs.

Surrey, last year’s beaten Blast finalists, have now won their first three South Group matches and a 4,000 crowd – the maximum allowed under government restrictions – lapped it up as Roy plundered 18 from the second over, bowled by off spinner Andrew Salter, with four fours either dismissively lofted straight or fired through the covers.

Sixteen more came from the next over, as slow left-armer Prem Sisodya was pulled by Roy for six and also taken for two fours by Will Jacks. Roy then pulled seamer James Weighell for six as Surrey’s 50 arrived in the fourth over.

Jacks was caught at deep cover for 10 but Roy swept Labuschagne’s leg spin for four and pulled him violently for six. When he skied the same bowler to cover in the ninth over, Surrey’s total was already 88 and it was left to Laurie Evans and Jamie Smith, who both played excellently for 39 and 35 not out respectively after both Sam Curran and Jamie Overton had fallen to spin, to see Surrey home with 10 balls to spare.

Labuschagne got off the mark with a pulled four off Sam Curran and the only false shot in a superb innings, before he skied Jordan Clark to cover in the final over, was an inside-edged four off Clark in the 12th over as he began to look to accelerate the scoring.

Perhaps the stroke of the night – despite Roy’s pyrotechnics – was Labuschagne’s sole six, pummeled over long on off Clark from down on one knee in the 18th over and there were eight fours too from the Australian.

Kiran Carlson also provided impetus with a 13-ball 23, including a sweetly-struck six off Sam Curran over square leg, before being run out by Tom Curran’s direct hit from third man trying to complete a second run.

David Lloyd fell for 10 in the fifth over, caught at deep square leg, and Selman’s quickfire innings – in which he struck Matt Dunn for 4, 4, 6, 6 from consecutive balls in the fourth over – ended three overs later with a lofted drive to extra cover off Dan Moriarty’s left-arm spin.

Both Colin Ingram and Chris Cooke holed out in the deep, for 4 and 6 respectively as Moriarty finished with 3 for 26, while Dan Douthwaite and Weighell perished cheaply either side of Labuschagne in the frantic final over.

Surrey opener Roy said: “We are extremely happy with our three performances so far, and the wins of course, and it’s a pretty good feeling still to have things to work on. It’s ideal really to have stuff to improve, whether that’s in the field or being more hungry with the bat.

“But we were outstanding again tonight with the ball, we were very clinical in making them hit to where we wanted them to hit, if you like. They were fifteen or twenty runs below par for the conditions and I felt a lot better this evening when I batted. At Lord’s, against Middlesex [Surrey’s first match], I was very scratchy.

“Jamie Smith also played very well to get us to the line and he’s very calm for a young guy. It was great too to have a crowd back tonight, as we always love playing here in front of our own fans.”

Matthew Maynard, Glamorgan’s head coach, said: “I think we were ten or fifteen runs short, no more than that really, but with the ball on that pitch they made home advantage count. Also, with the bat, I think they got their angles right and seemed to get more twos than we did on a big outfield.”