No result disappointing for well-positioned Sussex 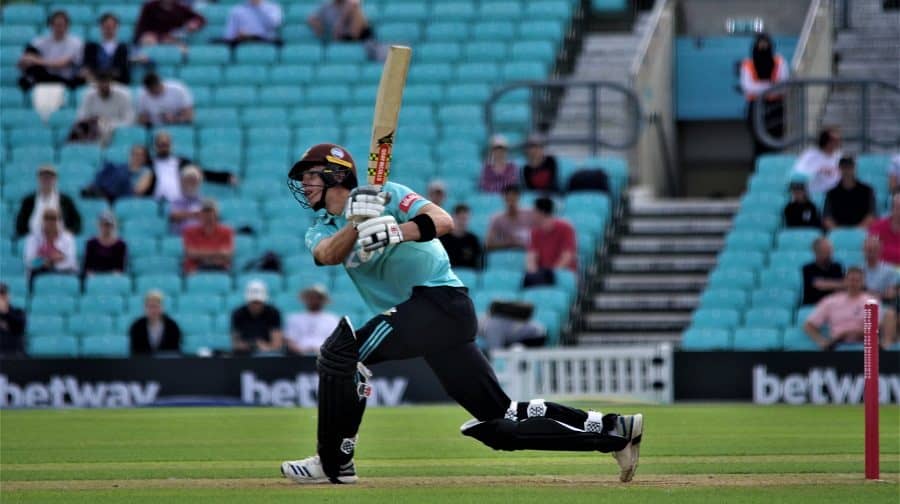 Surrey and the Sussex Sharks were just one ball away from completing a Vitality Blast match at Hove on Sunday when umpires Tim Robinson and Paul Baldwin led the players from the field.

They did not return, so each team took one point from a no result.

Surrey had scored a challenging 175 for seven at the 1st Central County Ground and with rain in the air the Sharks openers Luke Wright and Phil Salt began their innings at a hectic tempo in order to get ahead of the Duckworth-Lewis rate.

They took 36 runs off the first three overs and at 43 for one off 4.5 over were well ahead on the D/L method.

But with the fourth ball of a Kyle Jamieson over the New Zealand bowler struck Sussex skipper Wright on the helmet. With light rain falling and the light deteriorating the umpires conferred and then left the field with the players as a number of the controlled maximum crowd of 2,500 vented their frustration. To make a “match” a minimum of five overs must be bowled.

The outcome was particularly disappointing for Sussex, who were well positioned.  They lost their first game in the competition to Gloucestershire on Friday and before that they had three games washed out.

Surrey had made a positive start to their innings after Sussex chose to field, scoring 29 from their first three overs.

But when Tymal Mills replaced Ollie Robinson at the Cromwell Road end he struck with his first delivery, as Will Jacks skied to Luke Wright at long-off.

Former Sussex batsman Laurie Evans looked in good touch against his old team-mates and hit Robinson for two sixes in an over, flicking him to long-leg before hoisting him over midwicket for another maximum.

Rain drove the players off the field for an hour after 6.1 overs, when Surrey were 53 for one.

When they returned the innings was anchored by Jamie Smith, who reached his fifty off 40 deliveries, with two fours and a six.

He then hit Robinson for another six, over extra-cover, before he walked across his stumps in an attempt to work the ball to leg and lost his leg stump.

England bowler Chris Jordan bowled only one over and came off early with an apparent injury.

There was a brutal cameo at the end from Jamie Overton, who hit three sixes and two fours in a 14-ball 28.

But it all counted for nothing at the end of the damp day.

“It’s not how you want to finish a game of cricket,” Sussex Sharks coach James Kirtley said. “The lads are very gutted but they’ve shown incredible character in what might have been a provocative situation.

“As a coach I’m there to keep calm and keep the team calm. We would obviously have liked to see it managed differently. But the decision was made and sadly we were a ball away from securing two points.

“The umpires said conditions had got worse. And it was their judgement that that was the time to call it.

“It’s frustrating. It’s hard from the sidelines. But we’ve got to remain calm. The lads have shown real maturity because it could be blue touch paper time, things like this. Because we play at the height of our emotions.