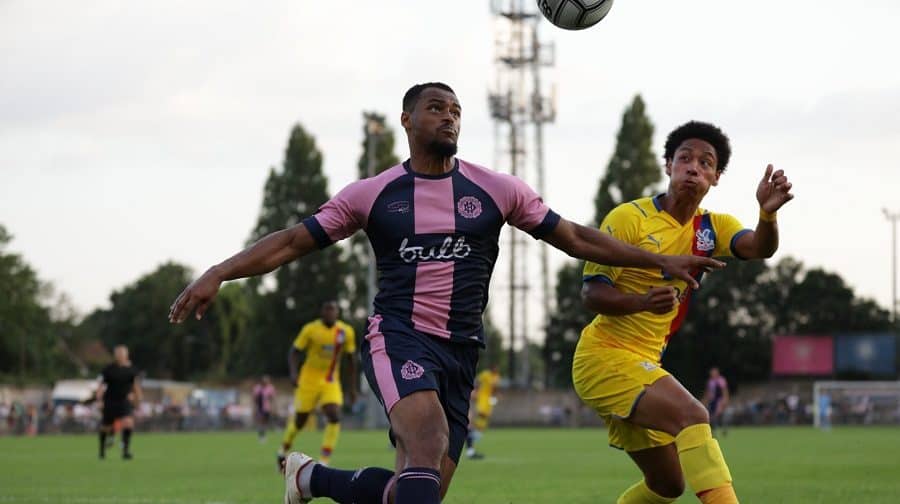 The Hamlet were well off the pace. Photo: Liam Asman

Dulwich Hamlet were played off the park by an extremely talented Crystal Palace under-23 side on Tuesday evening, as potential stars of the future were on show at Champion Hill.

The young Eagles cruised to a 5-0 win. Along with the fledgling talent was the experience of defender Pape Souare, back training with the club after leaving for French side Troyes in 2019.

There was more first-team pedigree too with Nya Kirby, a midfielder who featured in the League Cup last season, while winger Brandon Pierrick, 19, played twice in the Premier League during 2019-20.

Dulwich goalkeeper Charlie Grainger was beaten for the first time after just three minutes, when an excellent move was completed by David Omilabu, who side-footed the ball low into the bottom left corner. Minutes later, John Kymani took the ball round Grainger to slot home for 2-0.

Dulwich manager Gavin Rose and assistant Junior Kadi may have been encouraged by some positive moments from new forward AJ Harris-Sealy, who created one or two openings for Danny Mills during the 90 minutes.

While on the other side, Palace were watched in the stands by former striker and club ambassador Mark Bright, who was sat alongside first-team goalkeeping coach Dean Kiely.

The visitors got their third and fourth goals in the seventeenth and 22nd minutes. First Kymani took strides towards the byline and centred the ball for Omilabu for his second of the match, then a poor backpass by Hamlet left-back Andre Blackman was pounced on by that man again Omilabu. Grainger came off his line to completely wipe out the forward, but Kymani was on hand to seal a brace of his own.

Harris-Sealy forced the second part of a tremendous double-save by Palace stopper Joe Whitworth –  born in February 2004 no less – in the 58th minute, but not long later Lion Bello, on for the visitors in the second half, went through on goal and smacked a shot across Grainger in off the post for the fifth goal.

Dulwich’s only starting trialist of the night hit the post midway through the half, and Jack Holland also brought the Hamlet close to a consolation goal as he headed against the post in the 85th minute.

Late on, one of the night’s big cheers came when the same trialist sliced a volley into the crowd, knocking the beer out of a fan’s hand, showering him and his friends.