More than 3,000 in east Dulwich to witness dramatic end to chaotic game 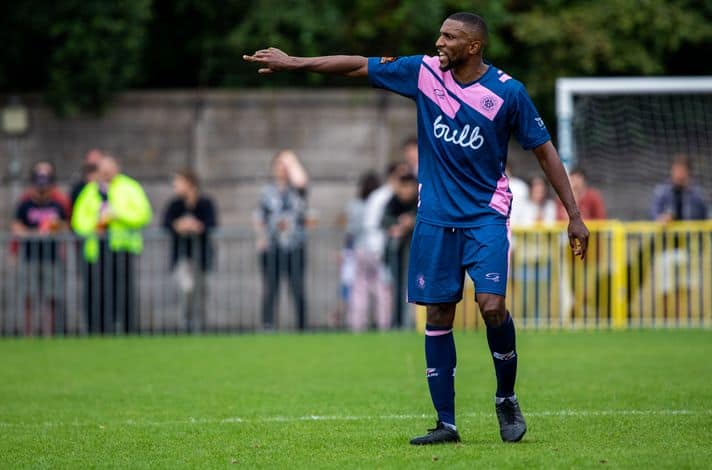 Dulwich Hamlet seem determined that this will be a rip-roaring season as they dramatically defeated Hampton & Richmond Borough 4-3 in front of more than 3,000 fans at Champion Hill last weekend.

The majority of those at Champion Hill were sent into ecstasy in the 89th minute when Jack Holland scored the winning goal.

It was a fitting end to a chaotic game after Danny Mills gave Gavin Rose’s side the lead in the third minute before Ryan Gondoh in the tenth minute and Kyron Farrell five minutes later responded for the visitors.

Mills made it 2-2 21 minutes in but Hampton took the lead again ten minutes after the break through Charlie Wassmer.

Ronnie Vint made it 3-3 after an hour before Holland ensured the Hamlet had the final word.

Dulwich set the tempo early, forcing two corners. From the second, Mills was at the back post to head home Gio McGregor’s delivery.

The away side responded and former Millwall midfielder Farrell went close in the seventh minute but his free-kick went over Charlie Grainger’s crossbar.

The Beavers were level three minutes later when Niko Muir raced down the right to find Gondoh who evaded a challenge before firing past Grainger.

Gary McCann’s side continued to pile forward and when Jaydn Harris’ effort came off the post, Farrell was there to fire into an open goal.

The attacking action was relentless. Six minutes after Farrell’s goal, winger Jordan Green found Darren McQueen arriving at the near post. He mis-kicked but managed to find McGregor whose shot was blocked but Mills was there to finish for his second of the game. 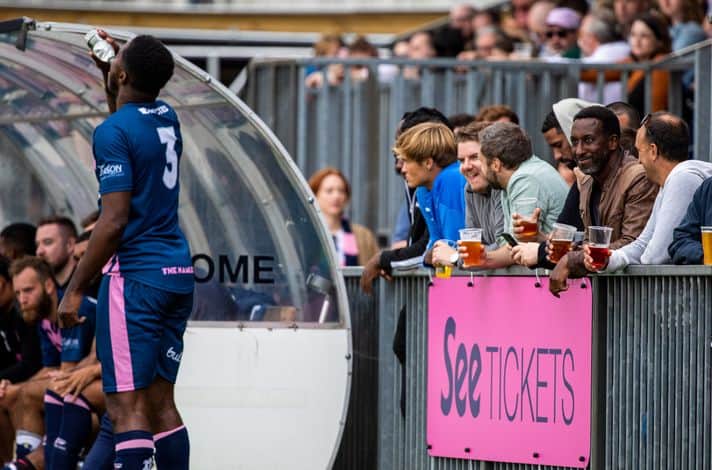 Rose’s side had the chance to take the lead before half-time when Jordan Green was fouled, but Jordan Higgs missed from the spot as Julian dived low to his left to save – Hamlet’s fourth failed penalty by a fourth different player this season, their fifth in total.

Early in the second half, McGregor had a shot blocked for a corner and then Muir fired over Grainger’s crossbar.

Hampton were in front again in the 55th minute when Vint conceded a free-kick and Farrell’s delivery to the far post was headed home by Wassmer.

Five minutes later, Dulwich hit back. McGregor was again centrally involved as Julian tipped over his free-kick and when the Hamlet man whipped in the corner Vint was there to head in at the far post.

But sides traded more chances and the hosts were almost back in front when Julian fumbled McGregor’s shot but just recovered in time to prevent the ball going over the line.

More drama followed with five minutes left when Sam Cox was shown a straight red card for a wild tackle on McQueen.

McGregor fired the resultant free-kick towards goal that Julian saved.

But it was no surprise that McGregor would again be involved as Dulwich grabbed the late winner. It was another set-piece, Holland heading home to park wild scenes in east Dulwich.

New loan signing from Crawley Town, Ricky German, almost added a fifth after running forward from halfway but the over-worked Julian denied him with another full-stretch save.

The result puts Dulwich sixth in the table. The Hamlet were scheduled to be away at Havant & Waterlooville this Saturday, but the Hampshire side are in first-round FA Cup action against Charlton at The Valley.

Dulwich’s next league game is at home to Bath City on November 13.