Ade’ll do as Dulwich Hamlet cruise through in cup 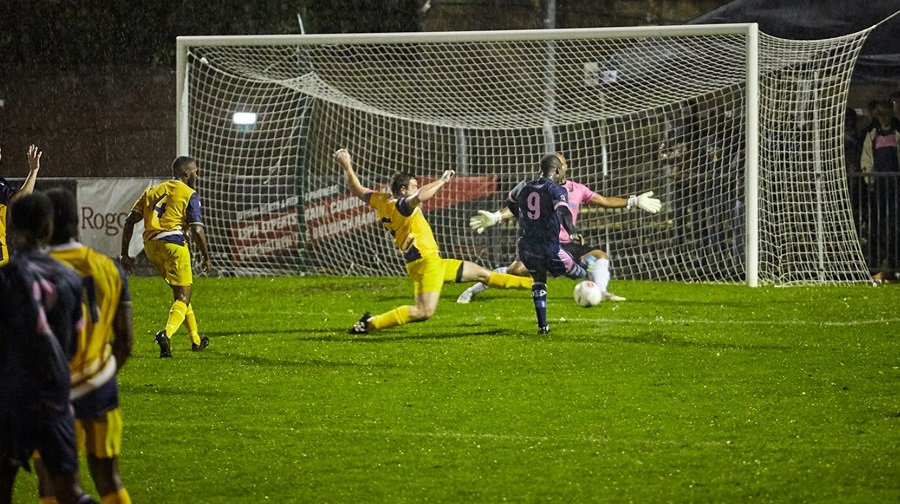 Gavin Rose gave a competitive debut to goalkeeper Charlie Grainger and fielded recent signings Jarvis Edobor and Amos Nasha in his side.

Dulwich dominated from the outset and Connor Hunte saw an early effort cleared off the line. Yusuff had a goal ruled out before he gave the hosts the lead in the 26th minute from Ben Chapman’s pass.

Yusuff then set up Hunte for the second eight minutes before half-time as the Hamlet went into the break in control.

Yusuff should have had another at the start of the second half but missed from close range, before Hunte couldn’t match a scintillating run from midfield with a finish.

The hosts came forward in waves and Jamie Splatt missed another chance from a few yards out.

The Hamlet refused to ease up the onslaught.

Dulwich’s third finally arrived in the 63rd minute when Kieran Monlouis gained possession in the middle of the pitch and sent a perfect pass through to Yusuff who showed calmness and composure to round keeper Nic Taylor and score.

He had the opportunity to complete his hat-trick from an Amos Nasha cross but saw his effort saved.

The visiting side pulled a goal back with twelve minutes left when forward Nahum Green shrugged off Aaron Barnes to finish past Grainger.

The home side restored their three-goal advantage three minutes later as Yusuff got his hat-trick after sweeping home a cross from former Millwall winger Lewis White.

White then curled a shot wide and Chapman was also denied by Taylor, before Dominic Vose added a fifth goal in the last minute. It was a superb effort as he cut inside and curled his shot around Taylor.

Last Saturday, Dulwich drew 2-2 at Chippenham Town in National League South. Luke Haines put the hosts in front before Quade Taylor equalised and a minute from time Daid Ijaha seemed to have won it for the visitors.

But Richard Orlu’s own goal five minutes into added-time gave Chippenham a point.

Dulwich dropped to thirteenth in the table.

The Hamlet are in FA Cup action on Saturday in the third qualifying round. They host Eastbourne Borough at Champion Hill at 3pm.

Southwark NewsSportAde’ll do as Dulwich Hamlet cruise through in cup