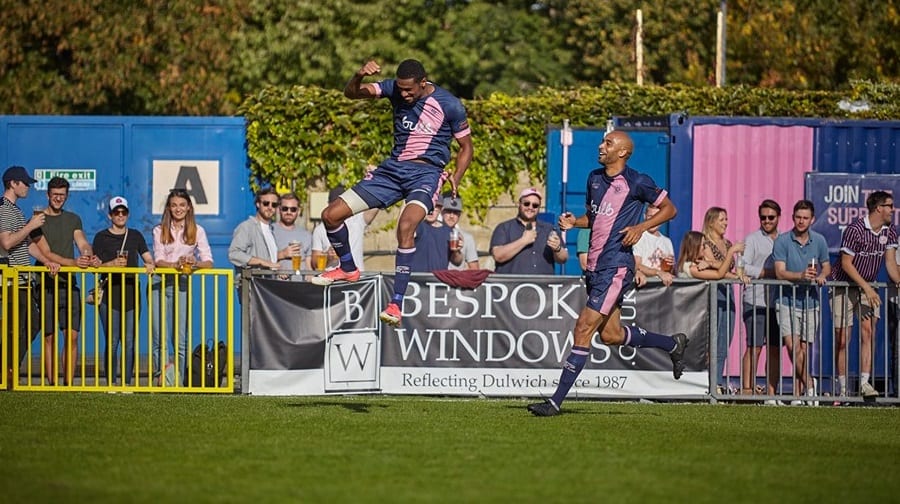 Gavin Rose was pleased with how Dulwich Hamlet applied themselves in their FA Cup second qualifying round win against Bognor Regis last weekend.

The Hamlet ran out impressive 6-1 winners at Champion Hill, aided by a brace apiece from Danny Mills and Nyren Clunis. Quade Taylor and Adam Yusuff got the other goals to set up a third qualifying round tie at home to Eastbourne Borough.

Dulwich steamed 2-0 ahead with efforts from Taylor and Clunis in the second and eighth minutes, a start Rose was pleased with.

“In terms of the first fifteen, twenty minutes I was happy,” Rose said. “We were very aggressive, won the ball back and it led to us scoring two goals.”

Dulwich controlled the first half against the Isthmian League Premier Division side as they took that advantage into the break.

They scored four more and Rose attributed the rout to a more complete attacking display in the second period.

He said: “In the second half I thought we were better on the ball, won the ball higher up the pitch and were more of a goal threat.

“There’s been games this season where I thought we could’ve scored more goals and I knew at one point we would. It came [Saturday].”

It was Hamlet’s first win in six games, ending a poor run which has frustrated the manager. “I’ve been a little concerned at how we’re letting teams get back into games.

“We’ve been in front in most games we’ve lost and given away leads that, really, if we concentrate or work a little bit harder, we probably go on and get the game out of sight.”

“I’ve been a bit disappointed with our mental approach,” Rose continued.

“It’s a new group and that means new mindsets. We’re here to set a culture in the dressing room, so we’ll get stronger and hopefully learn from our mistakes.”

“His all-round game can still improve,” he explained. “With his back to goal, he could draw fouls a little bit more.

“He’s been at successful teams and at times ended up working really hard for the team, sometimes not getting himself the opportunities to score goals.

“We do try and get opportunities for him and he’s taken quite a few.”

Rose also updated fans on loan star Reise Allassani, who is currently back in Coventry receiving treatment for a ruptured ACL.

“He’ll be having an operation within the next week or two, I believe. He’s come back from a bad injury before. We think he’s mentally strong enough to get out of it.”

It’s unlikely Hamlet supporters will see Allassani in action again this season, but Rose hasn’t ruled out a return in the future.

“Apparently with the amount of time it will take for the operation and healing, I don’t think he’ll be back this season. Stranger things have happened.

“He may well be out of contract at Coventry at the end of the season. Reise is one of those people we’d always have, because we know he’ll be an asset to the club.”