Big Cheese ready for next step

Cheeseman impresses as he goes to 9-0 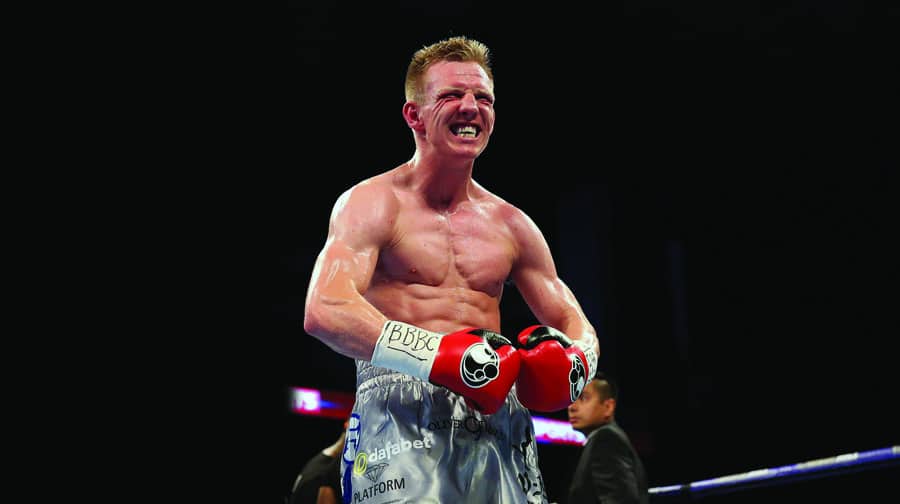 TED CHEESEMAN said he would “fight anyone” after winning the English super-welterweight title at the O2 Arena in Greenwich last Saturday night. Fighting on the undercard of the Frank Buglioni-Ricky Summers British light-heavyweight title bout, Cheeseman took his professional record to 9-0 with a devastating third-round stoppage of Matthew Ryan. ‘The Big Cheese’ dominated from the start, connecting well with accurate shots and staying out of Ryan’s range.

Cheeseman, 21, dropped Ryan to the canvas in the third with a left hook to the body, before the referee stepped in after the Bermondsey fighter sent his opponent sprawling again with a wicked right hook.

“My last fight gave me all the experience I needed. I could have got Jack [Sellers, whom he defeated on points] a lot earlier when I opened the second round, but I tried too hard and didn’t pace myself. “This fight I knew I could get him out there quickly, but I took my time and it came.

“I’ve been working a lot in the gym, I’ve had a twelve-week camp. “Everything worked better, everything looked good. “I feel great now I’m English champ.” Cheeseman’s trainer, Tony Sims, added: “It was a little step up for him and I thought he boxed extremely well. He took his time, his head movement was good, and we know he’s got the power.

“I was pleased for him. “The light-middleweight division is very open. Obviously you’ve got Liam Smith, Liam Williams at the top. It’s wide open for him to get into that British title slot.” Promoter Eddie Hearn was impressed with Cheeseman as he eyes the next move for his fighter.

Hearn said: “Liam Williams is at that level where he is moving on, and I hope he doesn’t hold people up. I think he should vacate the title and let Ted Cheeseman fight for the title next. “Tony says he’s ready to go. He’s moving through the levels so well. Matthew Ryan, English champion, he just dispatched him with ease. Hopefully that title will become vacant and Ted can fight for it before the end of the year.

“He’s ready, he’s cruising through these levels, he’s boxed on all the big shows. He’s ready for that next step.” And Cheeseman is confident he can take his career to the next level. “Put the person in front of me, I will train and fight anyone. It doesn’t matter. As long as Tony thinks I’m ready and Eddie thinks I’m ready I’ll fight. “That’s my job, that’s what I’m here to do. I just want to keep improving and pushing on.”