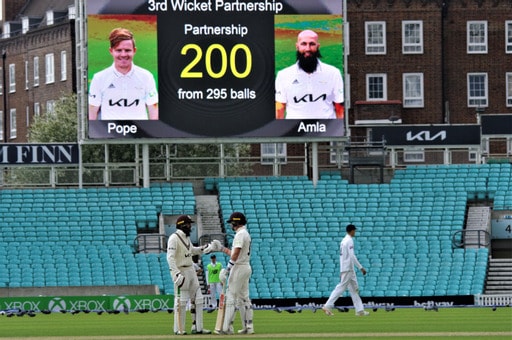 Kemar Roach’s superlative career-best 8 for 40 spearheaded Surrey’s completion of a crushing innings and 289-run victory against Hampshire, dismissed for 179 at the Kia Oval to be beaten inside three days last weekend.

Roach, the West Indies fast bowler, started Hampshire’s slide with a skilful 11-over new ball spell of 3 for 21 either side of lunch while veteran seamer Rikki Clarke chipped in with 2 for 31 after Surrey had declared their mammoth first innings on 560 for 7, a huge lead of 468.

And Roach then trapped both Liam Dawson for 33 and Scott Currie for 1 with wicked inswingers in a pre-tea burst before returning a third time to send back Kyle Abbott for 21 and Brad Wheal for a duck in his first over back.

His magnificent bowling was then rewarded with the final Hampshire wicket, when Lewis McManus was caught behind fending off a sharply-rising ball into his ribs shortly after reaching a defiant 51.

It was Surrey’s first LV= Insurance County Championship win of the season, after two losses and a draw, and for Hampshire a first defeat – and their heaviest post-War championship loss – after two wins from three matches.

Hampshire, indeed, began this game on top of Group 2 but earned only one bonus point while Surrey’s maximum 24-point triumph hauls them into contention for Division One qualification in what looks like being a fiercely-competitive conference stage.

Clarke, 39, made Surrey’s initial breakthrough, striking with his fifth ball to have Joe Weatherley leg-before for 14 in the eighth over.

And, soon, Hampshire were 44 for 4 as Roach pinned Ian Holland lbw with an inswinger for 18, had Sam Northeast caught at second slip for a duck from an ill-judged drive three balls later and, in his next over, going around the wicket to see left-hander Tom Alsop brilliantly held low down at second slip by Clarke for 6.

Almost immediately after lunch James Vince managed one cover four off Clarke before edging the last ball of the same over to keeper Ben Foakes to depart for 10.

Surrey, resuming on 513 for 3, batted on for 50 minutes although without Hashim Amla – the great South African retiring hurt on his overnight 215 because of a stiff neck after more than eight hours at the crease on days one and two.

Four wickets fell while 47 runs were added, with 19-year-old fast bowler Currie deservedly picking up three of them to finish with best first-class figures of 4 for 109 from 27.5 spirited overs in just his second appearance.

Currie had Foakes caught behind for 7, trying to steer to third man, and followed up by having Jamie Smith caught at mid off for 78 and catching Clarke for 14 off his own bowling, from a miscued heave, to trigger Surrey’s declaration. Jordan Clark, meanwhile, was bowled by Wheal for a duck off an inside edge.

Roach said: “I am delighted to have got eight wickets in an innings for the first time in my career and it’s the best I have bowled this year so far. I put in a lot of work in the two previous games, without getting the rewards, so I am very proud to have done that today and to have played my part in getting a win for the team. Now it is off to Leicestershire next week and hopefully we can carry this form on.

“It was a tough one to lose against Middlesex at Lord’s last week but we have bounced back here against a Hampshire side who were high on confidence. It was good toss to win and the perfect start when we bowled them out for 92 on day one, but it was a great team performance throughout. To get 10 wickets in the match does make me proud of myself, and the ball was coming out of the hand extremely well today.”