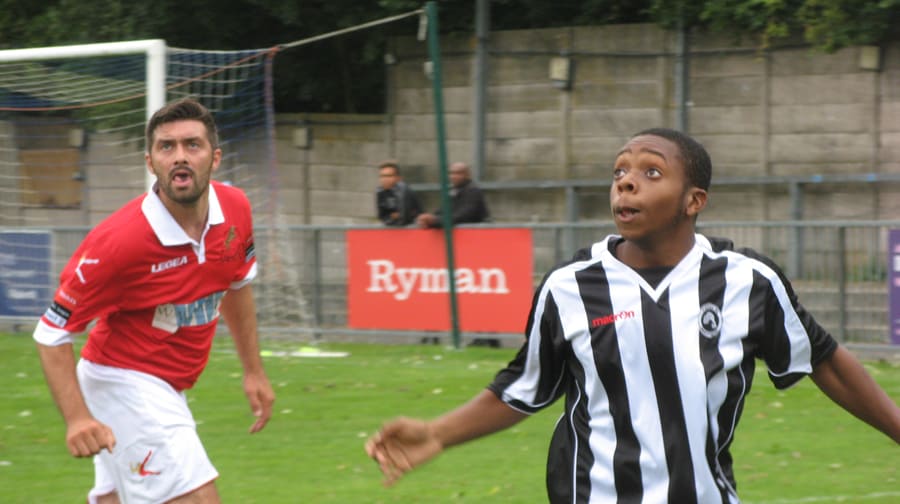 Winger Keiron Campbell made a goal scoring return for Fisher FC on Saturday as they overcame Canterbury City 2-1 to gain their first win of 2016.

Campbell scored a second half goal that proved to be the difference at the weekend after the Fish fell behind thanks to a Dan Lawrence penalty for the home side.

But Shelton Gooden levelled things up before the break for the Southwark side leaving Campbell to score the decisive effort on 57 minute.

Fisher boss Dean Harrison told the News that Campbell’s stay at the club, having recently turned out for Whitstable Town, would be short lived as he will have signed terms with Faversham Town by the end of this week. The Fisher boss said of the weekend showing: “It was a good team performance and it was a performance we have been looking to put on for a few weeks now. “There was a togetherness, unity and team spirit there that has been lacking. We have played well at times but that unity wasn’t there.

But on Saturday a lot of things have come together. “We spoke about what was needed at a meeting in training and we said we would accept nothing less from the players.” Since they last played on December 19 Fisher FC have appointed Danny Steele as the new assistant to Harrison.

The Fisher gaffer said: “We were at Stansfeld six years ago but it was a role reversal then in that he was the manager then and I was the number two. “He is somebody who I have been trying to bring in but he had other commitments. We work so well together and I trust him and he is somebody who is great to have around. “I am noticing the difference already and I think him coming in is bringing in that support that I have been seeking.” NEXT GAME: Southern Counties East Football League – Erith Town (A) Sat Jan 16 @ 3pm